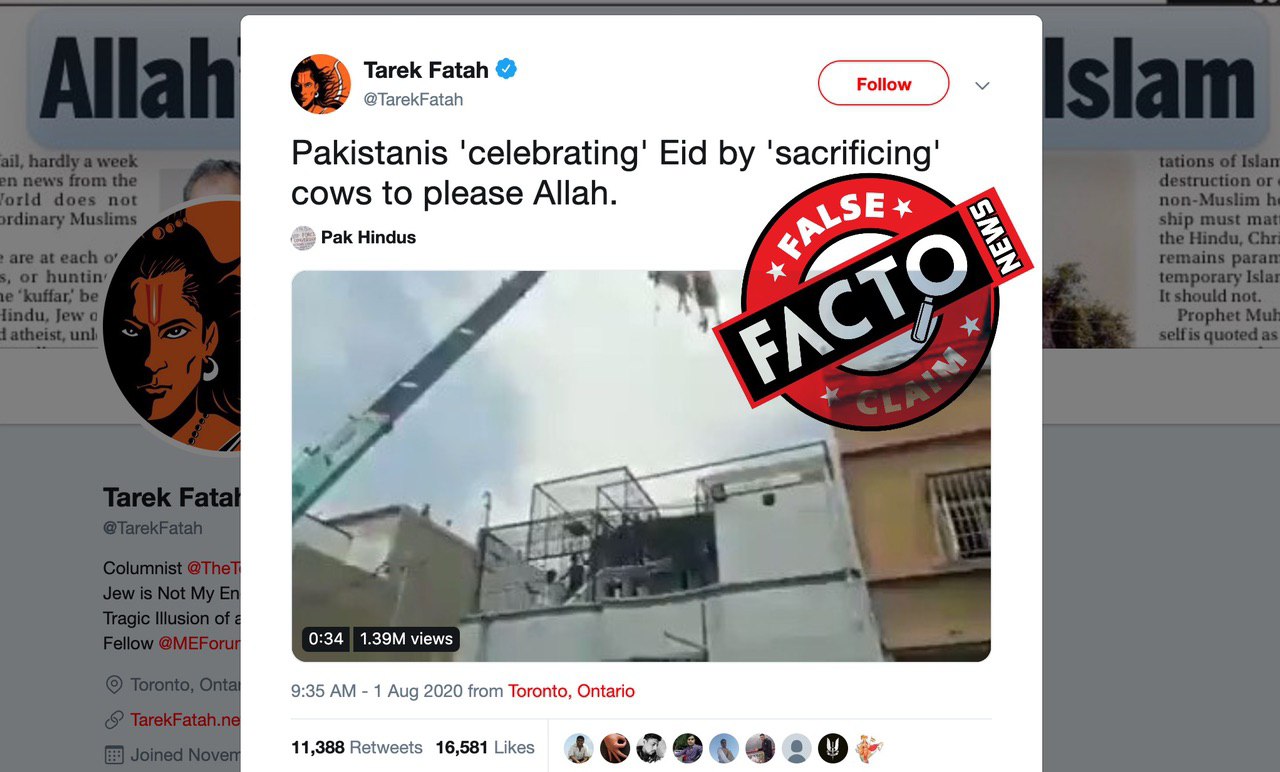 Pakistan: While Muslims across the world were celebrating Eid-ul-Adha(Festival of Sacrifice), a video of a bull falling from a huge crane went viral over social media with a completely wrong narrative. The accident has been given a communal angle to target Muslims during Bakrid.

Asianet News website published an article with caption “cow dropped from crane to celebrate eid in Pakistan video goes viral” with a feature image “Cow Dropped from Crane; who is the animal?”, which they later deleted and update the story to “Cow carried by crane for sacrifice in Pakistan slips, falls to the ground; video goes viral.”. They quoted Tarek Fateh’s tweet with a misleading caption and cropped video.

A video posted by Hnalde Pak Hindus has got over 1.5M view and 3K RT. (Archive), the tweet talk about cruelty against cow.

My heart is crying after watching this video.

The same video is also shared by Fake news peddler Tarek Fateh, with an inciting caption that got over 15K RT. (Archive)

It made people think that cows were actually being dropped to celebrate Eid.

and cow can be drop dead from height of the crane ,, this is not a news to post ,, @BDUTT

Have you seen that one in which they drop the cow from a crane and do the Qurbani. So peaceful.

They also hoist the cow 50 foot in air and drop them. Just as stated in the Islamic sharia as punishment for homosexuals and LGBT

The video which is shared across social media is cropped by the first 5-8 seconds, the part where a bull was being lifted from the terrace has been cropped from the actual video. 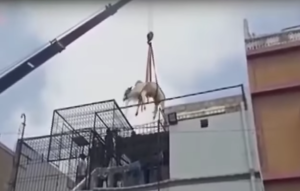 The viral video is from Karachi, surjani Sector 5D, the accident happened on 1st of AUG. The story was covered by multiple Pakistani news agencies. According to ARY news, the bull was being lifted off from the 2nd floor on the eve of Bakrid for Kurbani(Sacrifice) when it fell off accidentally. It’s very common in Karachi that people keep bull/cow on the terrace for years and raise them for Kurbani.

We also found another video posted on 24th July  2020, a bull was brought down safely with the help of a crane, there are many such videos of bull being brought down from the terrace during Bakrid. Here, here. People living in apartments or second or 3rd floors, they usually bring the calf and raise them for years for Kurbani and bring them down a day before Eid Al Adha with the help of Crane.

Conclusion: The incident took place when a bull was being brought down with the help of a crane. As per 24 News HD and ARY news, the animal was a bull not a cow as claimed by OpIndia, Tarek Fateh, and many others. The animal wasn’t dropped intentionally as claimed by many in social media.