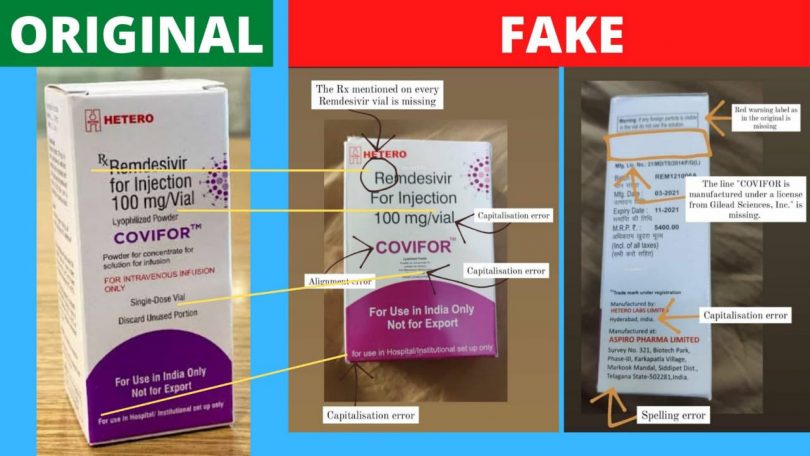 India: India has seen 360,960 new Covid-19 cases and 3293 fatalities in the last 24 hours. Many people across the country are turning to Twitter and other social media platforms posting SOS requests for beds, oxygen, plasma donors and Remdesivir, an antiviral drug manufactured by Hetero Drugs to treat Covid-19 patients. With Covid-19 cases surging everyday , and Indian govt. halting the exports of the drug, the demand for Remdesivir is rocketing which resulted in indiscriminate usage, illegal hoarding and black marketing of the drug. This caused artificial shortage of the drug and increase in price.

According to a report from ‘The Week‘, Lucknow police have made two arrests in connection with black marketing of the Remdesivir drug and recovered around 127 vials of the injections. There are also a lot of reports about fake Remdesivir being sold in the market. One such news was reported in India Express, where 41 fake Remdesivir injections were recovered from a staff nurse in Mysuru, Karnataka during a raid by Crime branch officers. The empty vials of the Remdesivir injections were either filled with Ceftriaxone (an antibiotic drug) or saline water.

During this time, several Twitter posts and WhatsApp forwards claiming to help people find out the differences between the genuine and fake drugs are going viral.  Monica Bhardwaj, DCP Crime of Delhi police tweeted, “Attention!! Lookout for these details before buying Remdesivir from the market.” with a photo which identifies the differences between original and fake drug.

Attention!!
Lookout for these details before buying Remdesivir from the market. pic.twitter.com/A2a3qx5GcA

Conclusion: Here are some key points that help you identify the fake Remdesivir:

Hetero drugs, the manufacturer of Remdesivir is now investigating the matter.