Kerala: The brutal killing of an 15-year-old pregnant elephant  which died in Palakkad district of Kerala was given communal angle again, yesterday we reported that how a section of social media users were falsely targeting Muslims for the Death of Pregnant Elephant, now many have deleted their tweets after exposed.

In a fresh controversy, again many social media users have started calling out two names ‘Amjad Ali and Thamim Shaikh’ and claiming that they are arrested by Kerala Police on pregnant elephant’s murder charges.

Amar Prasad Reddy, media advisor to the Union Minister of State for Health and Family Welfare, was one of the earliest to tweet. He later took it down but not before it garnered thousands of likes and retweets (archive). He subsequently tweeted a clarification.

We tried to contact the Palakkad Police station but unfortunately, we couldn’t establish any communication. However, according to an article published by Alt News, the Palakkad Superintendent of Police G Siva Vikram has termed the social media claims “fake” and informed that a man named P Wilson has been arrested in the matter. This was also reported by DD News Malayalam, The News Minute, and Hindustan Times.

While talking to Alt News SP G Siva Vikram also told that the two people who were let off were not named Amzath Ali and Thamim Shaikh.

ClaimReview: Amjad Ali and Thamim Shaikh were arrested for the elephant killing case in Kerala

France: France President Emmanuel Macron made derogatory remarks against Islam this month, which led to the Arab nations calling for a boycott of French products. Many Arab nations including, Morocco, Saudi Arab, Turkey, and Pakistan have condemned Macron’s comment on Islam. Amidst this controversy, a video is going viral where the police can be seen using water cannon over Muslim women protestors.

User (@YamrajFromHell) Parveen Chauhan, shared this video with the caption “Well done French police Streets are for the cars, not for praying.”,  (Archive) 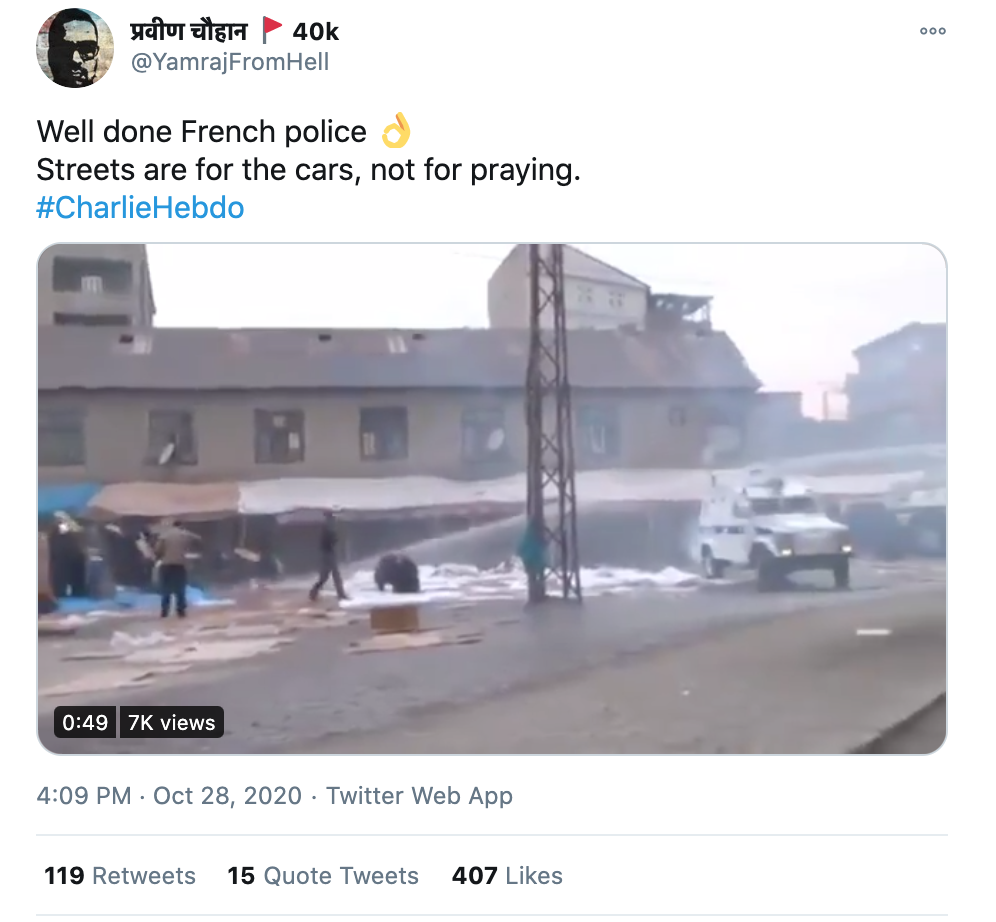 Another user (@dharmicverangna) Vaidehi, shared the same video with a caption, “French police used water cannon to clear the streets of Yüksekova! Streets are for cars, not for praying.” Th user initially said that its from France and later clarified that the video is from Turkey and asked people to understand the joke.  (Archive) 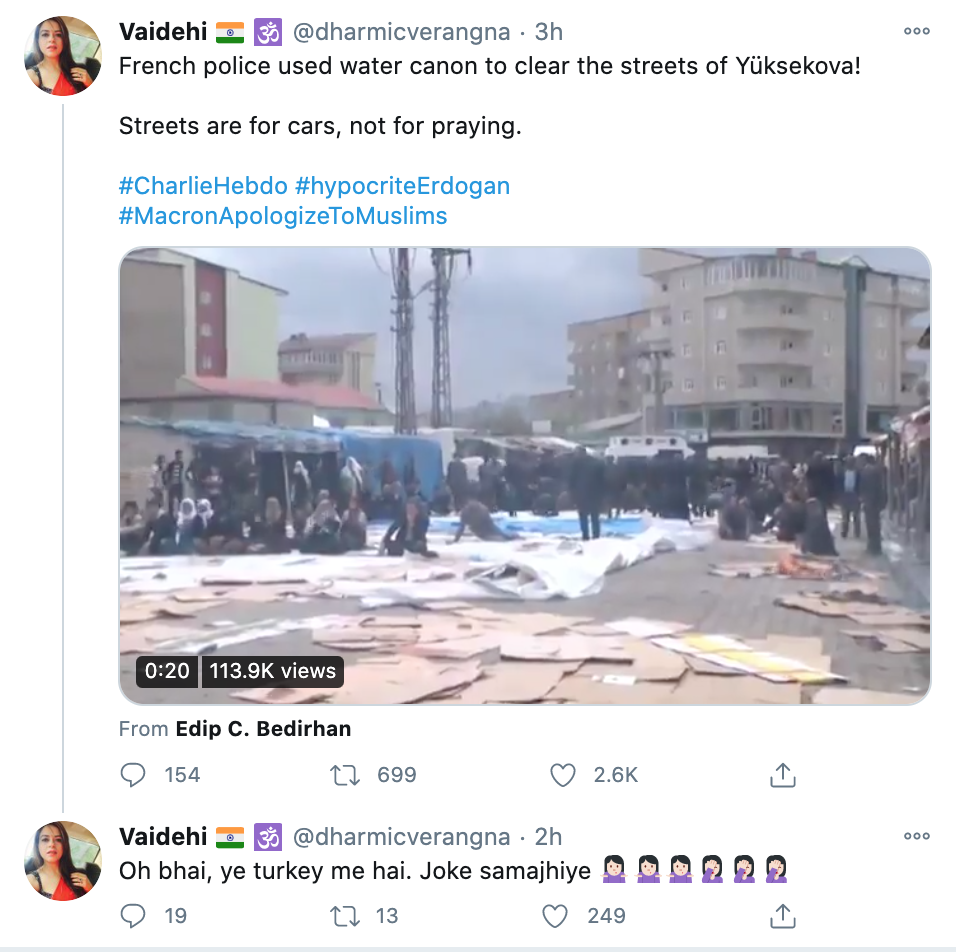 Another user @PiyushTweets1 shared the video with the caption, “When India is going to come out with secularism band & when will we start similar practice in India”. 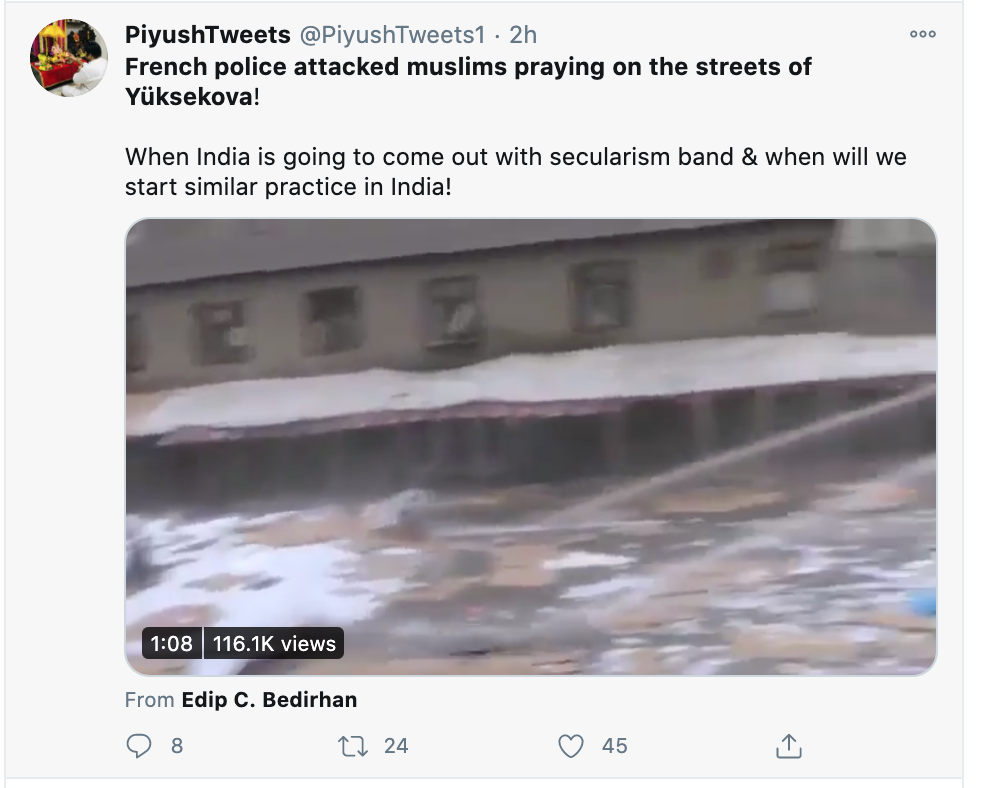 This video is shared by many other users without knowing the City name mentioned in the tweet “Yüksekova” is in Turkey but not in France. This video is viral on Facebook also. 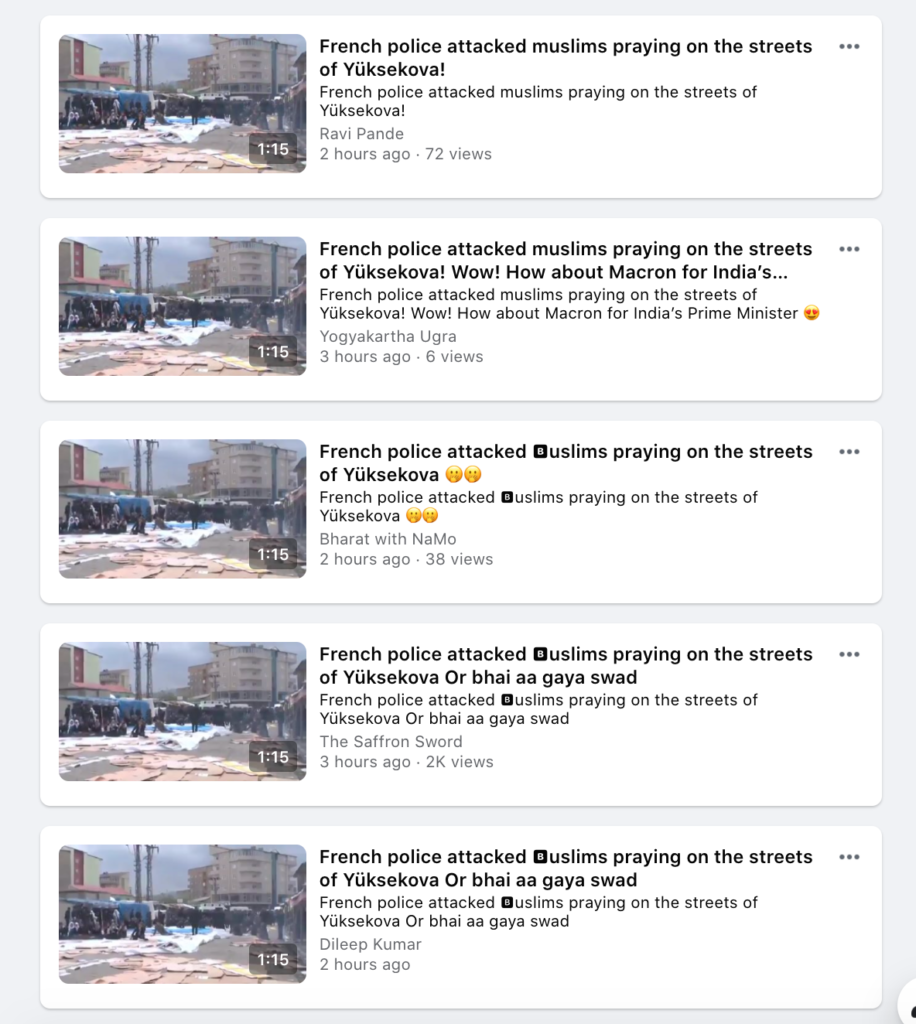 We did a reverse image search of some screenshots taken from the video and found a video posted on YouTube on 9thNOV 2012 with a caption in Turkish “Gaz bombalı ‘civil Cuma namazı – Yüksekova – Gever” (Civil Friday prayer with gas bombs – Yüksekova – Gever). According to another article published by yuksekovahaber.com.tr on 9th NOV 2012, citizens caught in the gas bombs performed their prayers without paying attention to the gas bombs. Citizens offering prayer reacted after the prayer and wanted to hold a sit-in action to support the hunger strikes. Police intervened with pressurized water and gas bombs against citizens who reacted and made a sit-in. 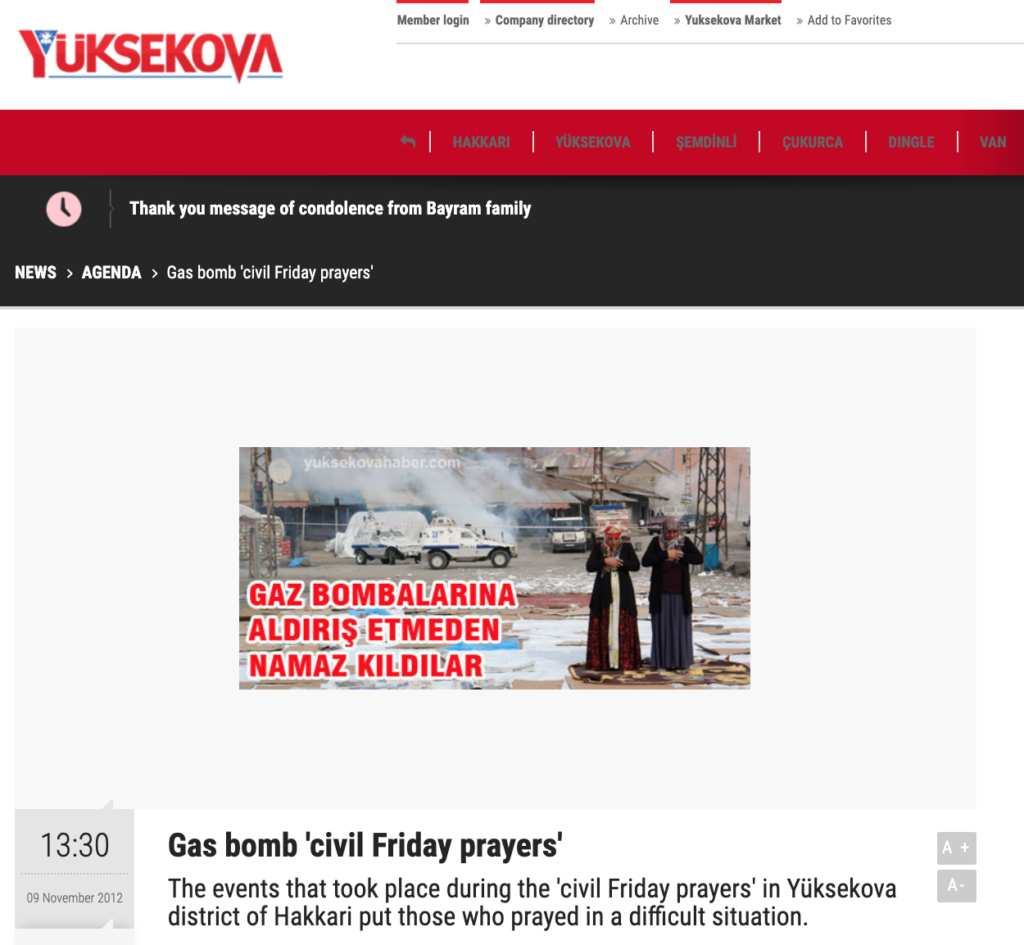 Youtube Video posted on 9th NOV 2012 from the same event.

Why this 8-year-old video is viral again?

This video is shown to let you see hypocracy of Erdogan. The police that you see is Turkish police, attacking Kurdish protesters.

Conclusion: An 8-year-old video posted by a Twitter user where water cannon and gas bombs were used against Muslims praying in Yüksekova,Turkey is being shared by Indian users with a different claim. The video is 8 years old and it’s from Turkey, not France.

A video of a teacher touching his student inappropriately is being shared by many social media users with a claim that the incident took place in a Madrasa (Islamic Pre-School). A Twitter user @gopugoswami shared the video from his account on October 19 with a claim, “बेटियों को मदरसा में भेजने से पहले विचार करें, उन्हें सरकारी विद्यालयों में भेज कर विज्ञान की शिक्षा दें, ये सब तो दुनियाँ सिखा ही देगी ( Think before sending daughters to madrasa, send them to government schools and teach science, all this will teach the world)”. The post has garnered over 3.5k retweets and more than 5k likes. 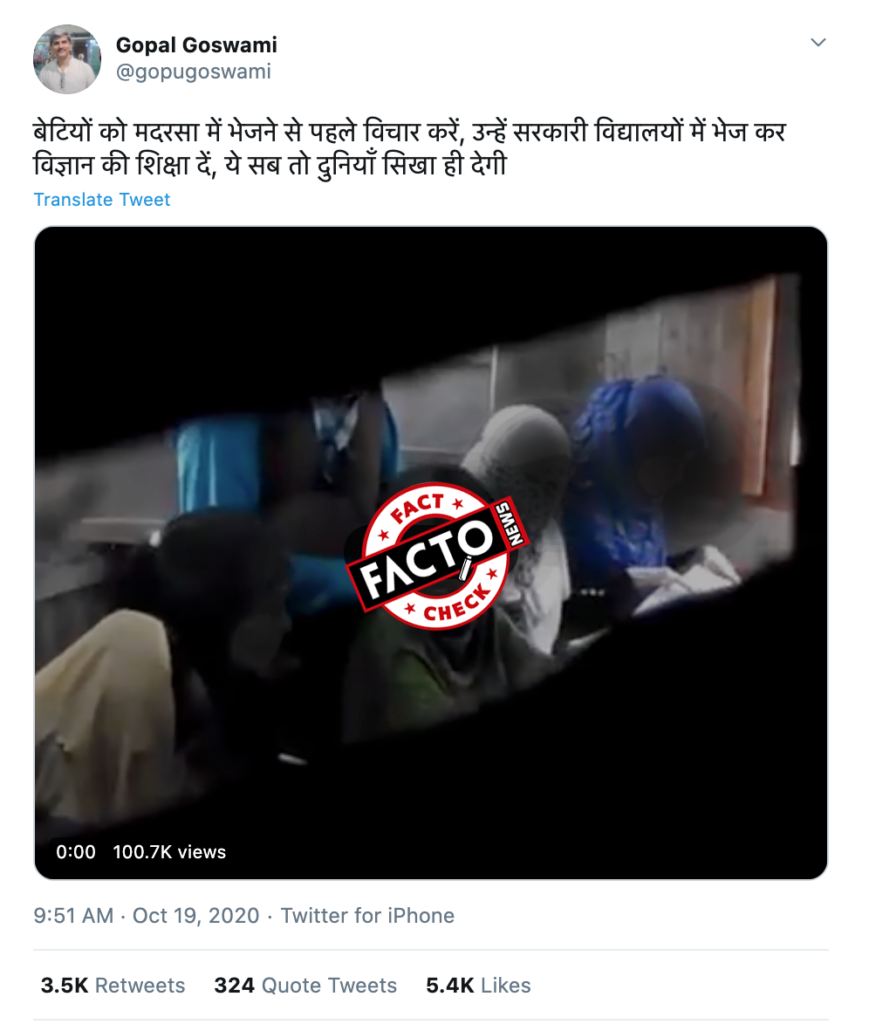 A lot of social media users retweeted the video and appealed to ban Madrasas in India. Though the initial post by @gopugoswami never claimed where the incident happened, many users (here here here here) believed that it took place in India and demanded that all the Madrasas should be banned in India. A Twitter user @abhi14377 shared the video with a claim, “@AIMPLB_Official एक दिन तुम्हारे ये सारे मदरसे बंद होकर रहेंगे। छोटीबच्चियों पे अपनी भूख मिटाते हो धर्म की आड़ में कमिनो।(@AIMPLB_Official One day all these madrasas will be closed. Kaminos under the guise of religion to feed their hunger on small children. #Madarsa #JaiShriRam @myogiadityanath @SmritiIraniOffc @RubikaLiyaquat)” and tagged ‘All India Muslim Personal Law Board’, Uttar Pradesh Chief Minister Yogi Adityanath in his post. Some users replying to the post have called for the nationwide implementation of National Register of Citizens as in Assam and tagged Prime Minister Office and Home Minister Office with #BanMadarsa_SaveNation tags.

The same video was quoted by Shefali Vaidya with the caption, “Ugh, this was horrifying to look at.”. The video is viral over Facebook as well with almost the same caption. “बेटियों को मदरसा में भेजने से पहले विचार करें, उन्हें सरकारी विद्यालयों में भेज कर विज्ञान की शिक्षा दें, ये सब तो दुनियाँ सिखा ही देगी.” (Think before sending your daughters to Madarsa, Send them to a government school to give them education, this they can learn by time.) 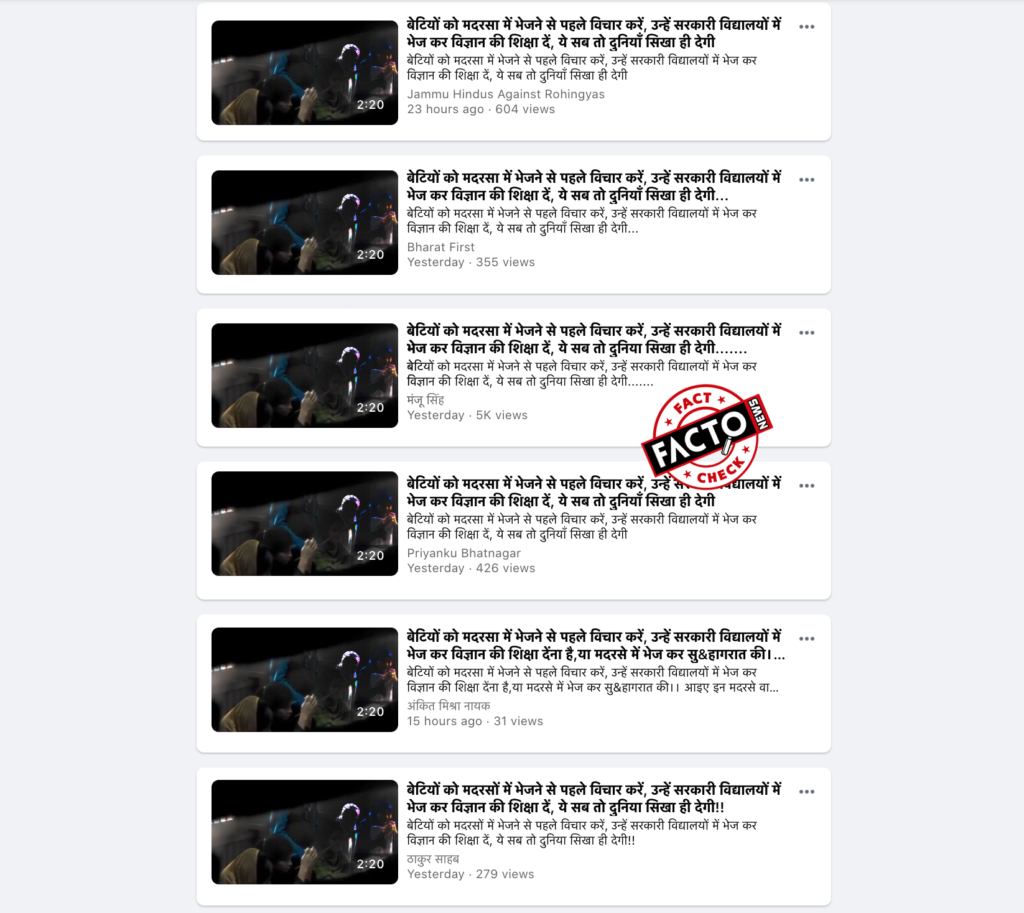 A reversed image search on Yandex(a Russian search engine) directed us to many YouTube videos which were uploaded on Bangladeshi channels. All these videos are recently uploaded though the original incident took place in July 2016.

As most of the videos on YouTube were in Bengali, we did some keyword searches and found multiple websites claiming that the video is almost 4 years old. A Bengali news website in their caption says “Old videos of teachers and students go viral again”, another website by the name tekdeeps.com claims the same. According to Tekdeep, the viral video is of Nurul Haque Sardar, the headmaster of Sonar Bangla Secondary School in Uzirpur upazila of Barisal. He opened a coaching center for female students in a rented room next to the school. This video of sexual harassment of the students who came to study at the coaching center was first spread in the area in June 2016 through the locals. 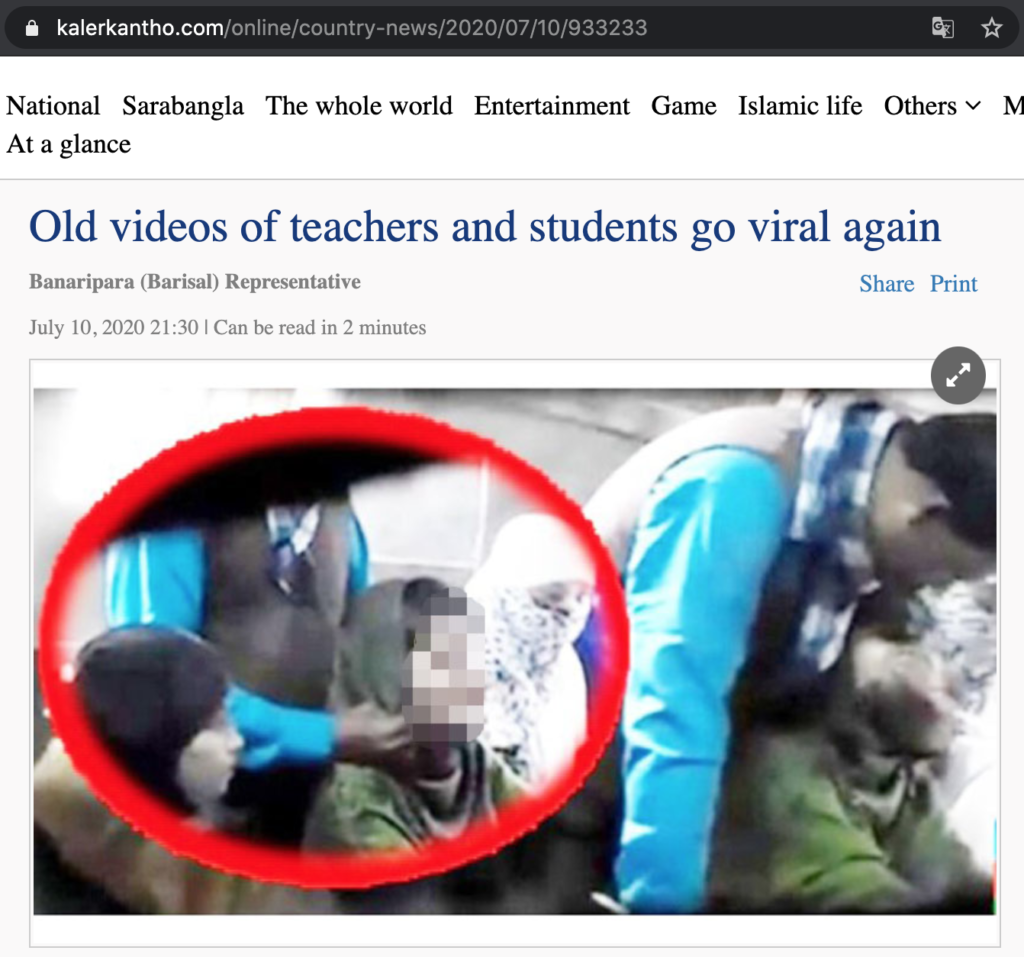 Conclusion: Videos is neither from Madarsa nor from India. It’s a 4-year-old video from Bangladesh where the incident occurred in the Girl’s only Tuition center. The above claims are misleading.

Killing of a woman from Madhya Pradesh is given communal angle, Accused Sohan is falsely identified as Rizwan 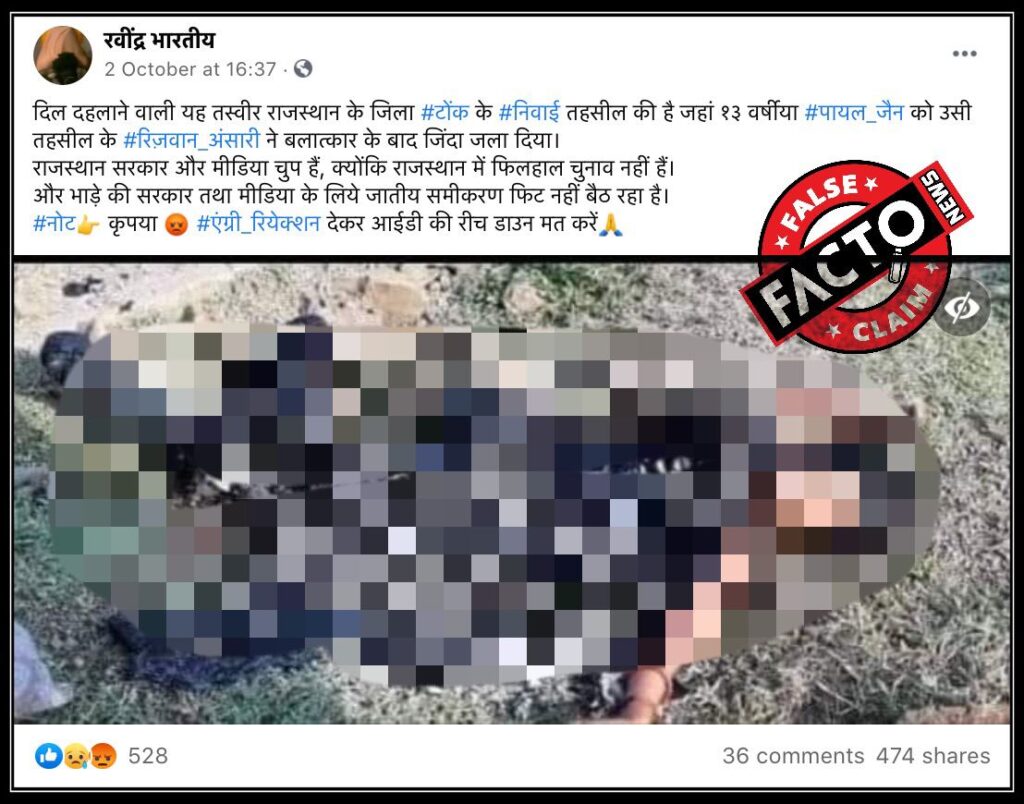 The user has also made an appeal to his followers that not to give ‘angry reaction’, which will reduce his post reach. According to his Facebook profile, Ravindra Bhariya is from Lucknow of Uttar Pradesh.

With Google reverse image search, we found few YouTube videos reporting the incident (here,& here). According to an article published in Nava Bharat, the body was first found on 29th SEP 2020. The viral photo is from the Gandhwani district of Madhya Pradesh, where the women’s friend wanted to get rid of her and got her killed, and burned the body with the help of his friend. According to the Police and charge sheet, accused Sohan has accepted the crime and the reason he told to the police was that he wanted to get rid of the women but she didn’t agree and Sohan was already married. So he planned her murder with his friend.

We also found a Zee News article, published on 4th October. the caption reads “wanted to get rid of women when she was not convinced, the man got her killed with help of a friend.”

According to a fact check published by Factly, there was no rape reported and the FIR filed on the incident does not mention rape. Only sections 302, 201 and 34 of IPC were mentioned. The FIR can be read here

Conclusion: In our investigation, the claim is found to be false, misleading and Islamophobic. Social media users should refrain from posting fake posts that push a communal angle.