On October 16, a 18 year old student in France beheaded his school teacher Samuel Paty, after Paty showed caricatures of Prophet Mohammed to his students. French President Emmanuel Macron responded to the incident saying, “We will continue..We will defend the freedom that you taught so well and we will bring secularism.” He said the teacher’s beheading was an attack on “the republic and its values” and added that France would “not give up cartoons, drawings, even if others back down”.

The recent attack at a Church in Nice killing three people by an Islamist terrorist has stirred up more controversy leading to protests all over the world. Prime Minister Narendra Modi has condemned the attack and offered his condolences.

While the Indian govt. extended its support to France in its fight against terrorism, a lot of people in India are protesting against French President Macron on his remarks against Islam. Read here – News 18. Amidst the controversy and protests, an image of Journalist Rana Ayyub’s CNN interview is going viral. The image posted by @tomehtaketchup consists of a news ticker that runs Rana Ayyub’s alleged quote, “You can not hate all the Muslims for just two beheadings.” The image also consists of Anand Ranganathan’s (editor and columnist of Swarjya) tweet that quotes a German newspaper report of terror attacks since 9/11.

The post’s caption reads as, “Hypocrisy Credit @ Ranaayyub, you can’t hate all muslims for 1,46,811 killings but one lynching in India is the rise of Hindu/Saffron/Hindutva Terrorism. cute.: (Archive) 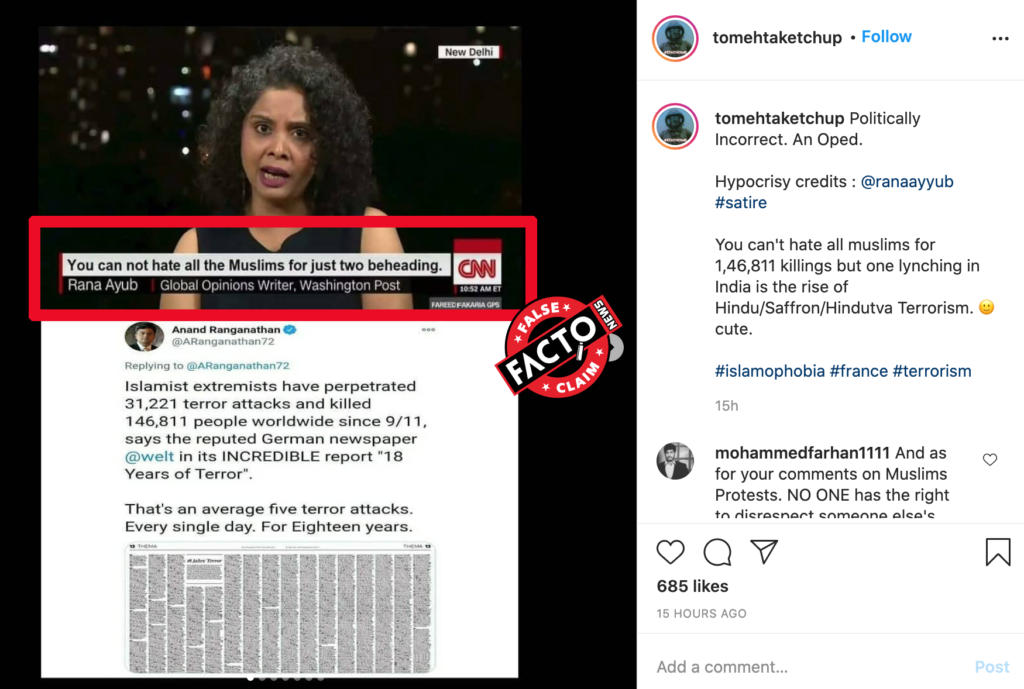 If you hate Kafirs,
you can't even expect love from Kafir community.
Yesh!! Mind it. @RanaAyyub pic.twitter.com/B1IgHZqBAQ

After verifying all the CNN interviews that featured Rana Ayyub, we have found the interview from which the viral image is taken from. On March 1, 2020, CNN invited Rana Ayyub to speak about violent clashes happened in New Delhi that killed dozens and injured hundreds. CNN has tweeted the interview clip from their official handle too.

Violent communal clashes killed dozens in New Delhi during President Trump’s visit to India.
“All this was happening at the same time as Trump was… telling the world that Modi has got everything in control,” Indian journalist @RanaAyyub says.https://t.co/Le24mtzW8d pic.twitter.com/WQQXSHoecw

In the viral image, the time stamp on the right side of the screen is displayed as 10:52 Am ET. At the same time, the news ticker displays the following statement, “DOZENS KILLED IN DELHI’S WORST SECTARIAN VIOLENCE IN DECADES’. 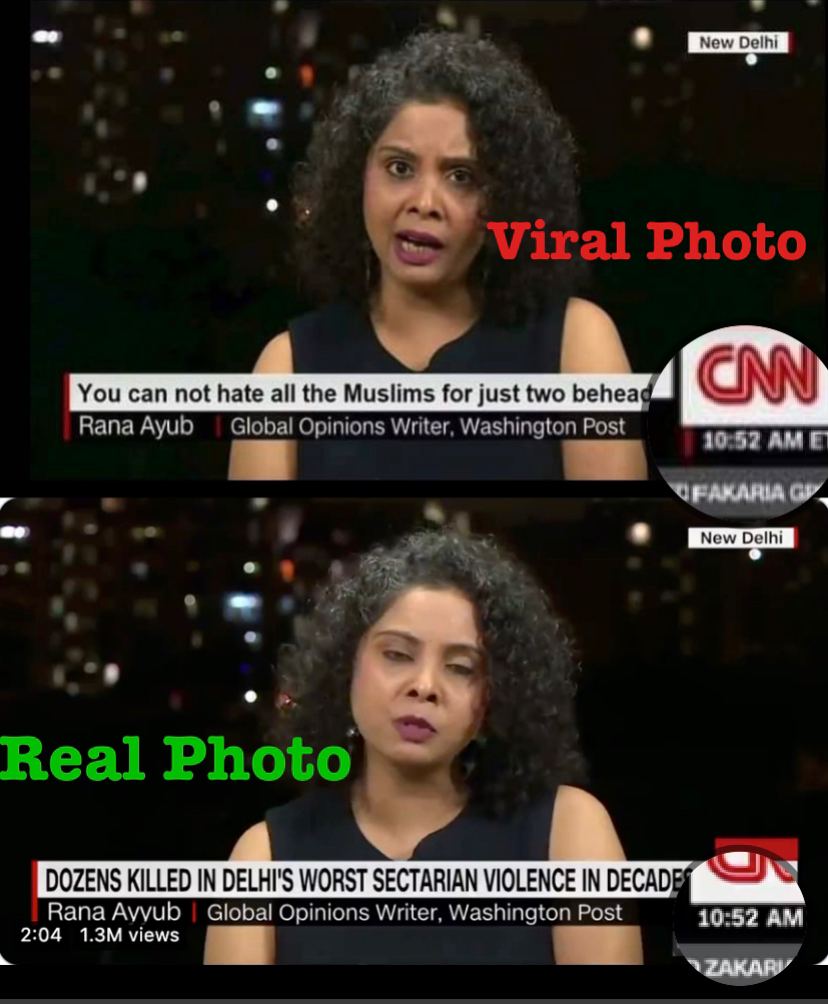 Rana Ayyub has replied to a viral image and tweeted, “The Indian right-wing at it again. Morphed a fake statement on an old image stating that “you cannot hate all Muslims for just two beheadings”. This image has been shared a thousand times all over social media and i am sick of battling this disinformation.”

The Indian right wing at it again. Morphed a fake statement on an old image stating that "you cannot hate all muslims for just two beheadings". This image has been shared a thousand times all over social media and i am sick of battling this disinformation. pic.twitter.com/UbpQZG83bM

Conclusion: It is evident that an old image is morphed with a fake statement. Rana Ayyub has also posted the viral image from her verified Twitter handle and called out the right-wing trolls for sharing the morphed image. The above claim is found to be FAKE and MISLEADING. 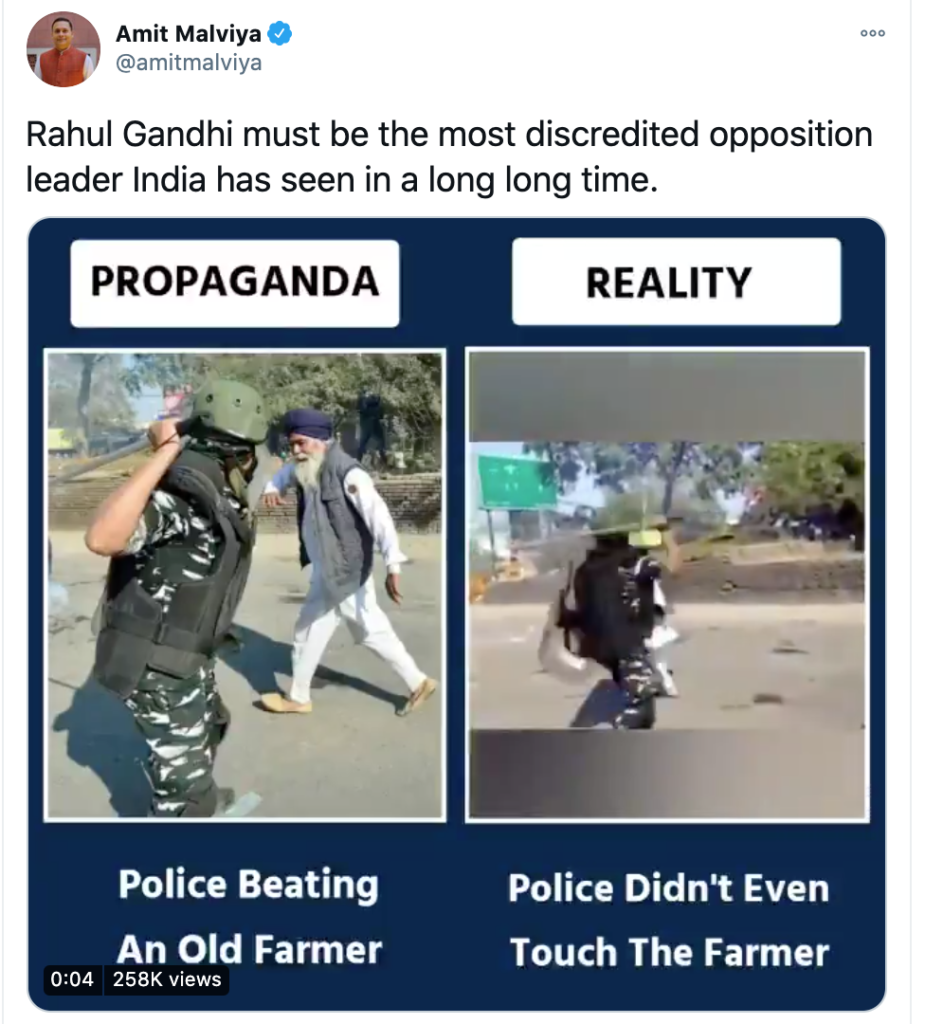 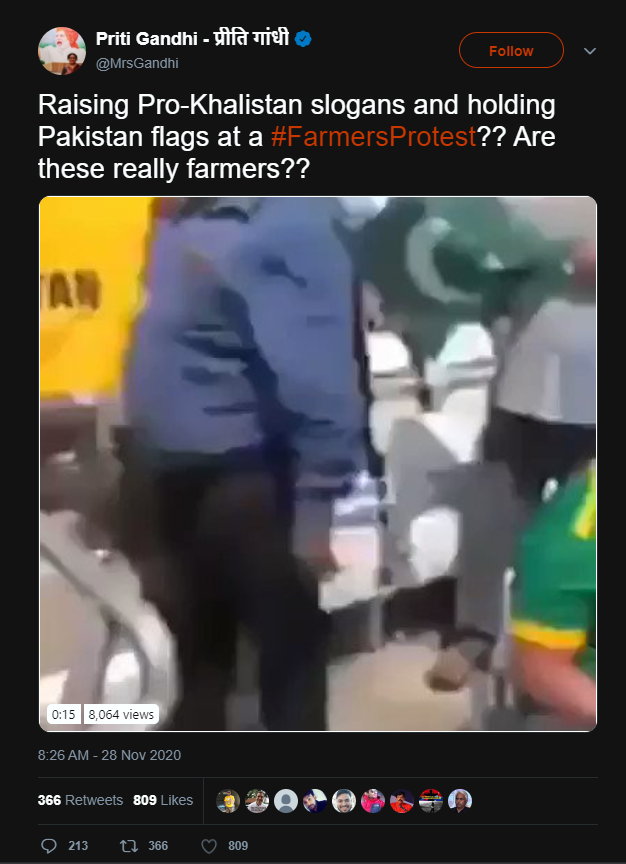 Fact Check: A photo of Swahili slave from 19th century is falsely shared as Tipu Sultan 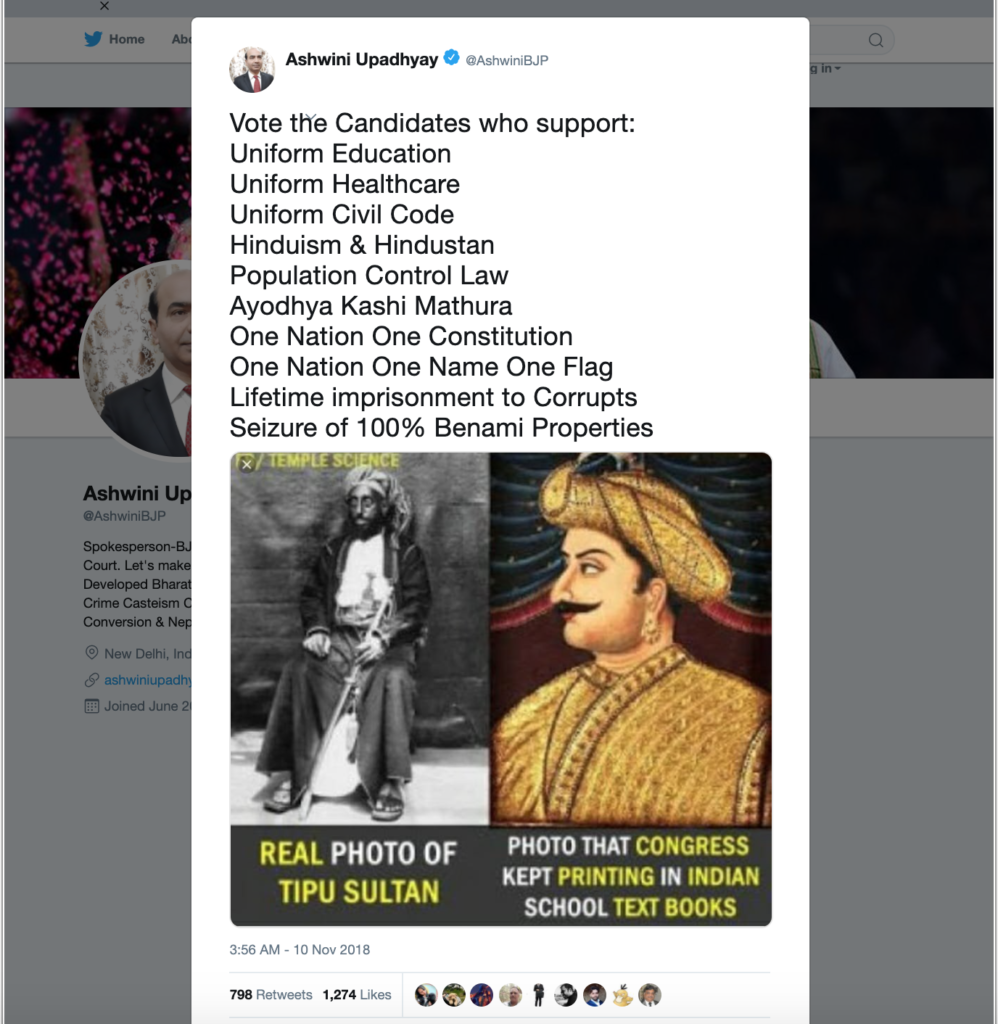 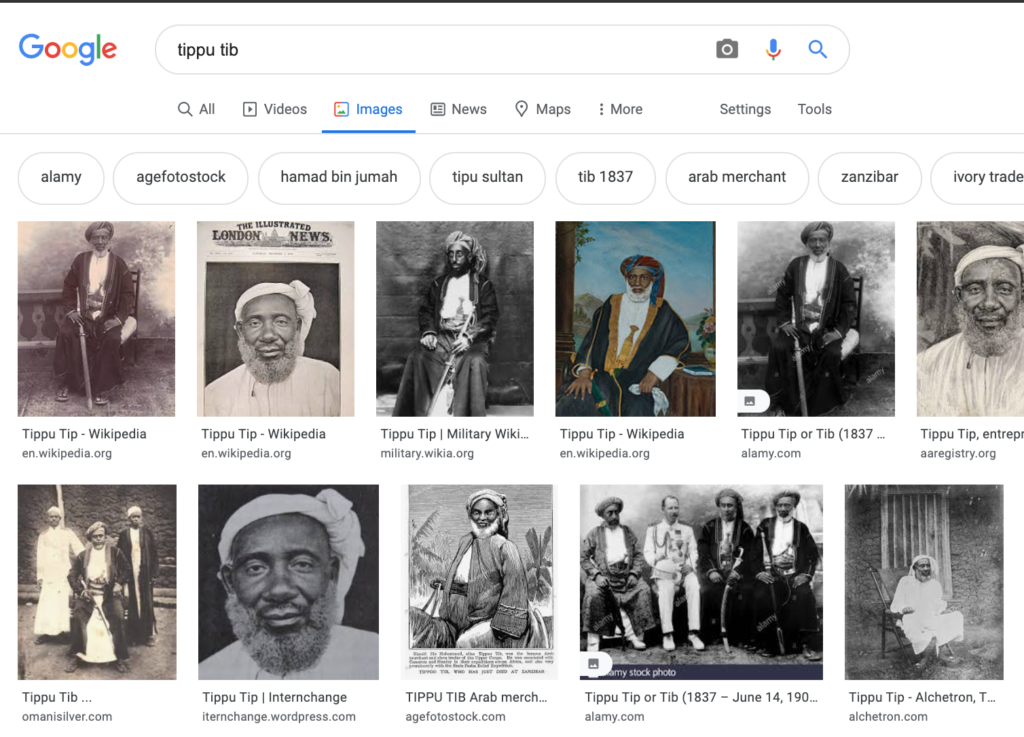 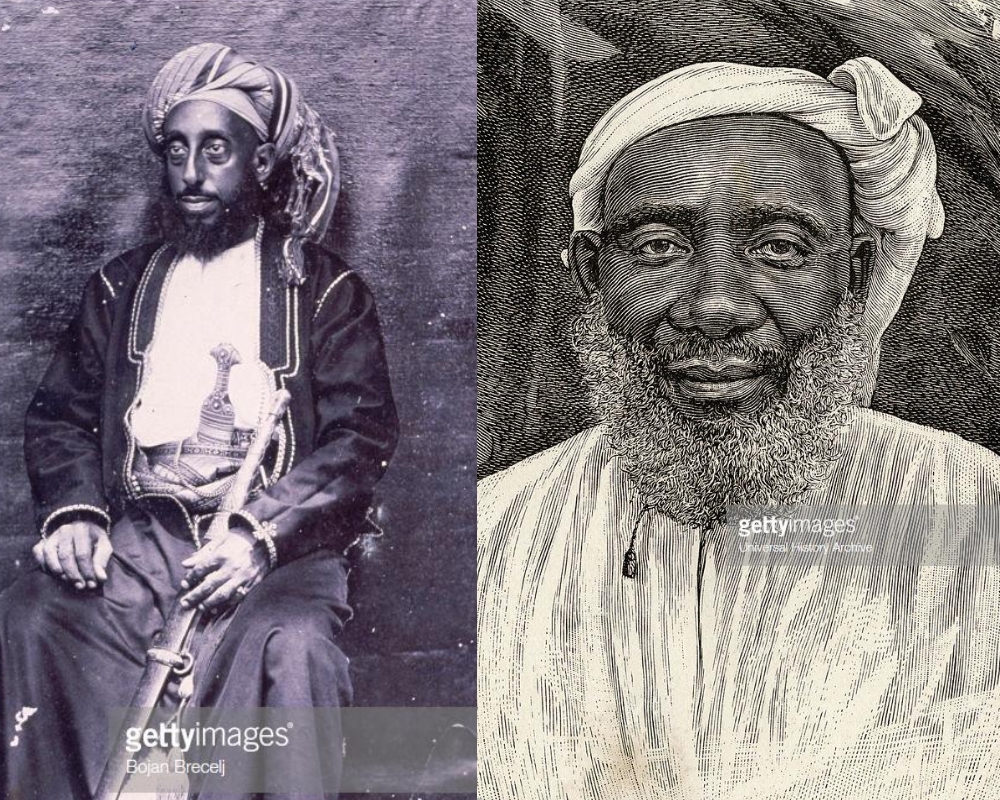