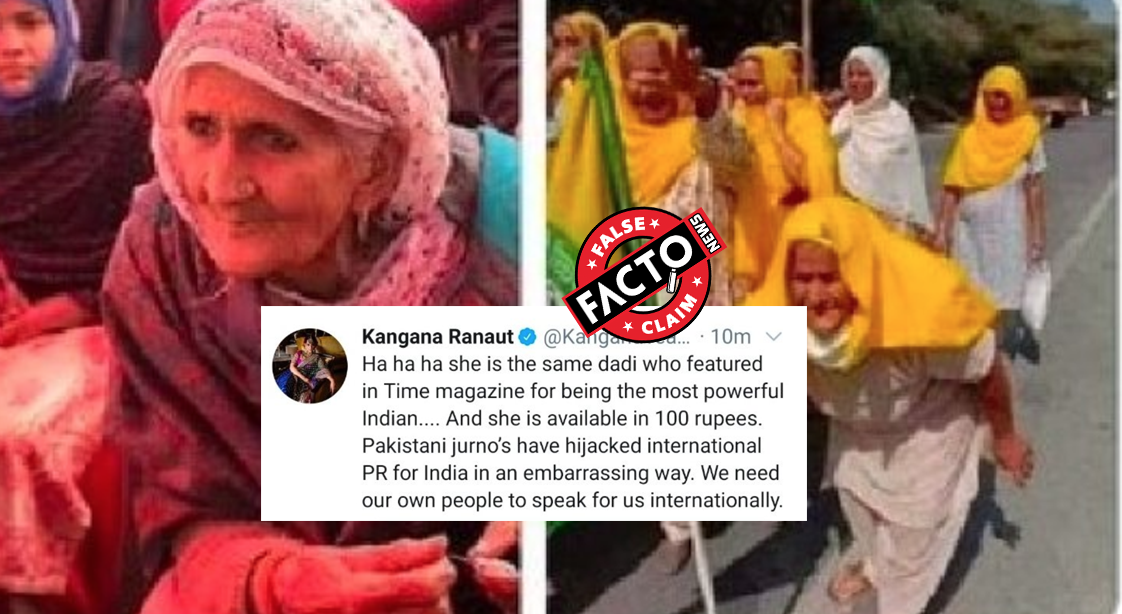 Thousands of farmers from Haryana, Punjab, and Uttar Pradesh have been protesting since September against the three agriculture bills passed by the government. After failing to gain support from their respective state governments (except for Rajasthan and Punjab), the farmers’ union have decided to march to Delhi to mount pressure on the union government. The protesting farmers had a clash with the police near the interstate border at Haryana’s Ambala district where water cannons were used to disperse the protesters. Amidst this ongoing protests, a lot of BJP and right-wing supporters are trying to discredit the farmers’ protest by sharing misinformation across social media. A collage of images of two elderly woman iv viral across social media with a claim that Shaheen Bagh Dadi – Bilkis Bano was present at the farmers’ protest.

Bollywood actor Kangana Ranaut has quoted the viral tweet and made some degrading comments. She said the Dadi who featured in Time magazine for being the most powerful Indian is now available in 100rs. Kangana’s tweet has garnered thousands of likes before she took it down. 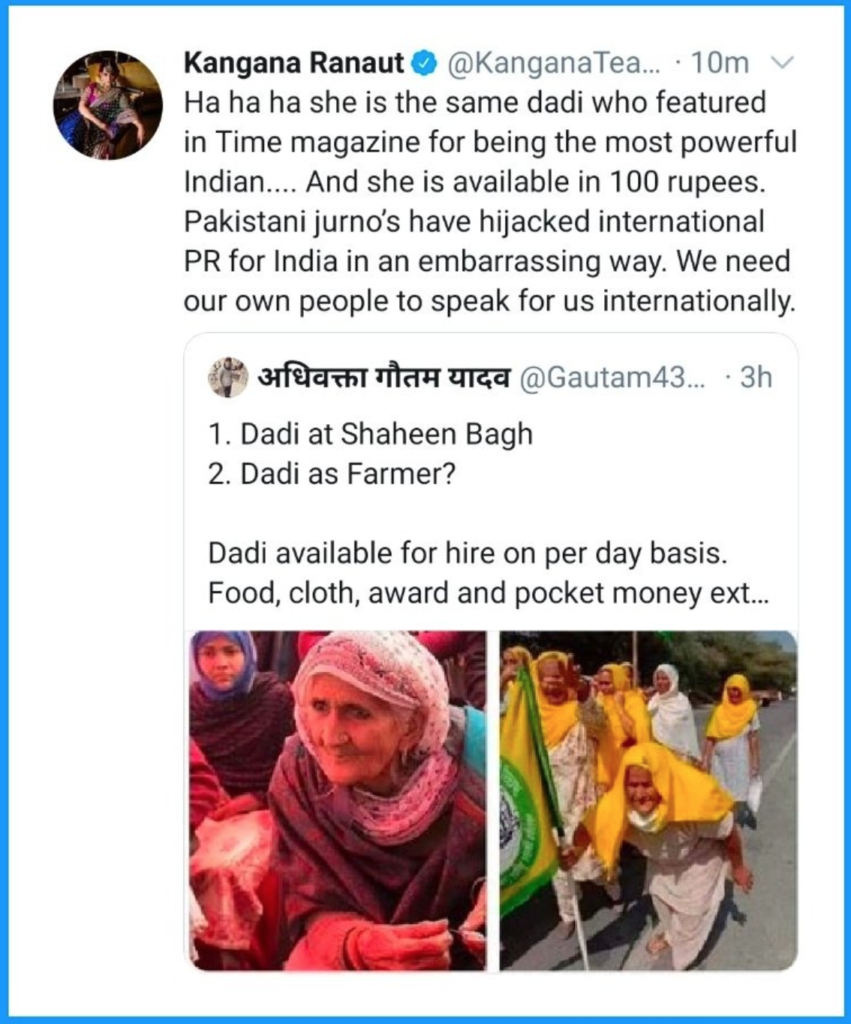 Twitter user Gaurav Pradhan tweeted the viral image and claimed that Shaheen Bagh Dadi was present at the farmers’ protest and is available for hire on a per daily basis, food, cloth and money. The tweet has garnered over a thousand retweets and thousands of likes.

The image on the left in the viral collage is the image of Bilkis Bano – Shaheen Bagh Dadi, published in several articles (here, here and here) during the Anti-CAA protests in Shaheen Bagh. Whereas the image on the right was posted by several Facebook pages and journalists during the farmers’ protests. According to Neel Kamal of Times of India, these elderly women are protesting against the farm-bills in Punjab.

#FarmProtestAgainstAgriLaws while farmers moved towards Delhi for bigger fight these gutsy women back in Punjab are contributing in a big way boosting morale, say companion farm women pic.twitter.com/GDN2JwIFnC

Fact check website Boom has published a video where Bilkis Bano has refuted the viral claims. When Boom interview Bano at her house, she denied that the woman in the photo is not her. “I am sitting at home, in Shaheen Bagh. I am not the one in the photo. The farmers who are protesting and the photo of the woman that is being shared is not mine. I will be joining the protest tomorrow,” Bano told BOOM.

Conclusion: Bilkis Bano has clearly denied that she is not present at the farmers’ protests. It is evident that the elderly woman in the  yellow scarf is not Bilkis Bano -SHaheen Bagh Dadi as claimed by Kangana Ranaut and other social media users. The viral claim is false, misleading and an intentional attempt to malign the farmers’ protest.