Mumbai: Recently Aamir Khan was in Turkey for the shooting of his upcoming movie ‘Lal SIngh chadda’. Mr. Khan also met with the Turkey’s  First Lady, Emine Erdogan, which received a lot of back lash in India. Multiple right-wing twitter users were criticizing Amir Khan for meeting the First Lady of Turkey after a 600-year-old Hagia Sophia(Church-Mosuq-Meusium) was turned to Mosque after 90 years. Kangana Ranaut who recently joined twitter has made a tweet quoting a fake article dated back 2012.

Her caption:  This is a danger combination, the outcome of a marriage is not just a blend of genes and cultures but even religions. Teach your kids to worship Allah, also worship Sri Krisha, that’s the only the meaning of secularism? ‘ 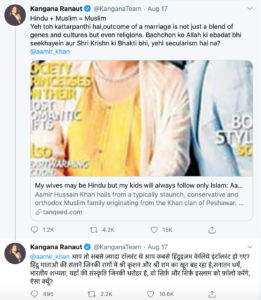 Tarek Fateh a regular fake news peddler, tweeted the same fake news that got over 5K RTs. All these tweets went viral again in WhatsApp too. 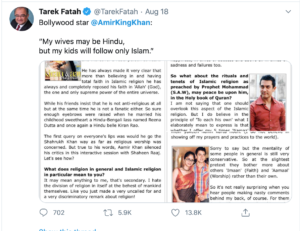 With a keyword search, we found an article published by a Hyderabad Daily Siasat.com dating back AUG 18, 2010 (Archive). The article goes with heading “My kids will follow Islam only”. The same fake news was published by Tanqeed.com in 2012 “My wives may be Hindu but my kids will always follow only Islam: Aamir Khan”.

We found Aamir Khan’s Interview at Aap Ki Adalat with Rajat Sharma, where we can see Aamir clarifying why he filed a case against those who were spreading lies about his fake interview citing he claimed that his son will always follow Islam. He says, there was online campaign going on to defame my image. (Watch at 52:00)

First Post Journalist Surendhar MK has also dismissed the claim by saying Aamir has filed case against the culprit.

This interview was completely concocted to spread lies. Aamir had filed a complaint against this and the person was later caught. Aamir had also firmly established of not giving such an interview. #StopFakeNews https://t.co/ZZHC4unhXd

Conclusion: Tarek Fateh is known for spreading hate and islamophobia through his twitter account. He was caught multiple times spreading lies against Muslims. Kangana also fell for the fake article and shared the news targeting Aamir Khan. But even after many fact-checkers debunked her fake claims, she has not deleted her tweet. We would like to confirm that the claim is found to be Fake and it was posted to target Aamir Khan.