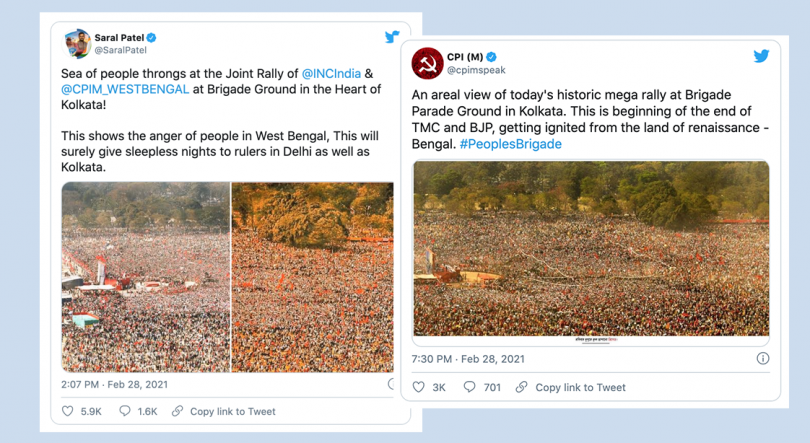 West Bengal: Political parties in West Bengal are speeding up the election campaigning as the Election Commission of India has announced the schedule for the  state-assembly elections for the 294 assembly seats to be held in eight phases starting from March 27 to April 29. The Congress -Left has organised a huge election rally at the Brigade Ground and massive crowd showed up. Several social media users have shared the images of the meeting.

Sea of people throngs at the Joint Rally of @INCIndia & @CPIM_WESTBENGAL at Brigade Ground in the Heart of Kolkata!

This shows the anger of people in West Bengal, This will surely give sleepless nights to rulers in Delhi as well as Kolkata. pic.twitter.com/XtAH9y52DW

CPI(M) @cpimspeak from its official handle has also shared the same image and claimed, “An areal view of today’s historic mega rally at Brigade Parade Ground in Kolkata. This is beginning of the end of TMC and BJP, getting ignited from the land of renaissance – Bengal. #PeoplesBrigade”

An areal view of today's historic mega rally at Brigade Parade Ground in Kolkata. This is beginning of the end of TMC and BJP, getting ignited from the land of renaissance – Bengal. #PeoplesBrigade pic.twitter.com/x3jUuDMtiN

Please find some other claims here, here, here and here

A reverse image search of the viral picture shared by Congress and Left supporters has directed us to a tweet shared by the West Bengal – Communist Party of India’s official handle @CPIM_WESTBENGAL on June 10, 2020, with a caption, “You can cut all the flowers but you cannot keep Spring from coming.” A bird eye view of last year Birgade Rally at #Kolkata #LalSalaamComrade

“You can cut all the flowers but you cannot keep Spring from coming.”

The image is also shared by a website peoplesdispatch on February 4, 2019. According to the website, a huge rally was held by Left Front on Feb 3, 2019 in Brigade Parade Ground, Kolkata with the call of over throwing the governments of BJP in the centre and TMC in the state. 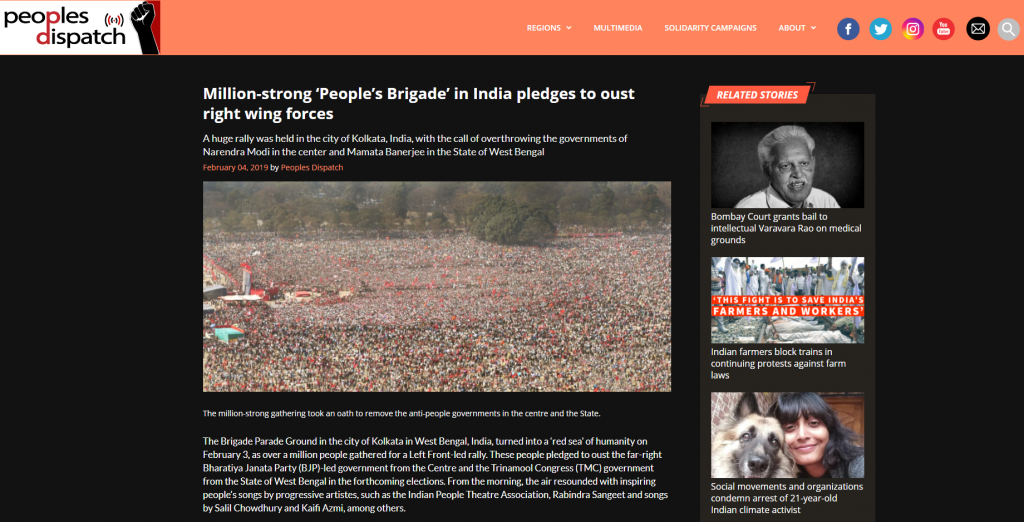 Conclusion: It is evident that an image from Left-Front rally in 2019. Congress party and CPIM supporters are sharing the old image and claiming it to be from the recent rally. Although a huge crowd showed up for the INC and Left’s combined rally, the picture shared by the leaders are misleading.