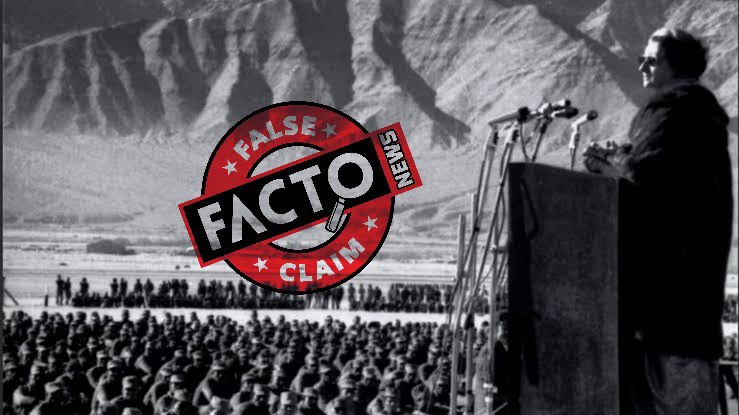 The  violent face-off between Indian and Chinese troops at Galwan Valley has resulted in the death of 20 brave Indian soldiers. After the incident,  PM Modi has called in for an all-party meeting in which he said, “Na wahaan koi hamaari seema mein ghus gaya hai aur na hi koi ghusa hua hai, na hi hamaari koi post kisi doosre ke kabze mein hai (Neither they have entered our border, nor have any of our posts been in the possession of another)”.  This statement has triggered a lot of criticism from the opposition, Congress party. Rahul Gandhi, targeted PM Modi over his statements and shared the satellite images to claim that the Chinese have occupied Indian territory at Pangong Tso, and questioned PM Modi over the alleged intrusion.

At this point, a  lot of  Congress’s official Twitter handles have tweeted an image of  former Prime Minister, Indira Gandhi, addressing Indian Jawans in the backdrop of mountains. The image went viral with a claim that the Indira Gandhi was addressing Army jawans at Galwan Valley. Many social media users have share this viral claim.

UP Congress, @INCUttarPradesh has shared this image from their official handle. The tweet has garnered more than 2.2k retweets and 9.2k likes. Archived here

Youth Congress, @IYC has also shared this viral image with a caption, “While one roared, another cowered”. The tweet got more than 1000 retweets. Archived here

While one roared another cowered. pic.twitter.com/SmRdHc2LQO

A simple reverse image search has directed us to an article in a  website called, “art-sheep“.  According to the article, the picture was taken in Leh, 1971, when former PM Indira Gandhi was addressing jawans. 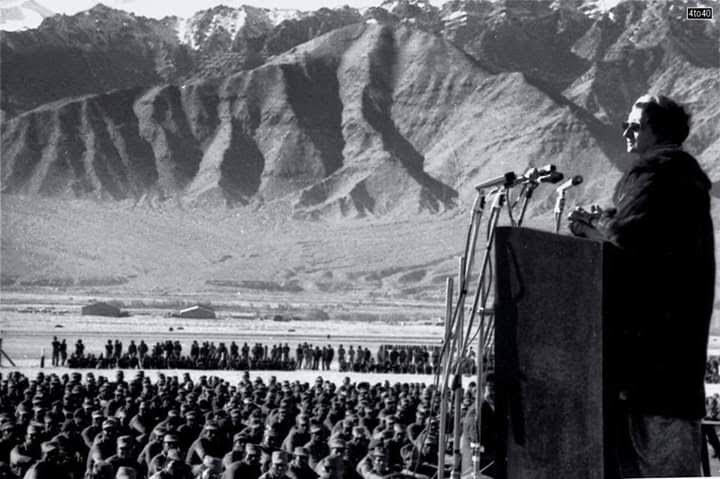 The same picture can also be found in PTI’s old photo archives. A simple search by keyword, ‘Indira-Gandhi-Leh-1971’, would direct to the picture.

Conclusion: It is evident that the picture was taken in Leh (1971) but not at Galwan Valley. So the claim that Indira Gandhi has addressed the jawans at Galwan Valley is false and misleading.