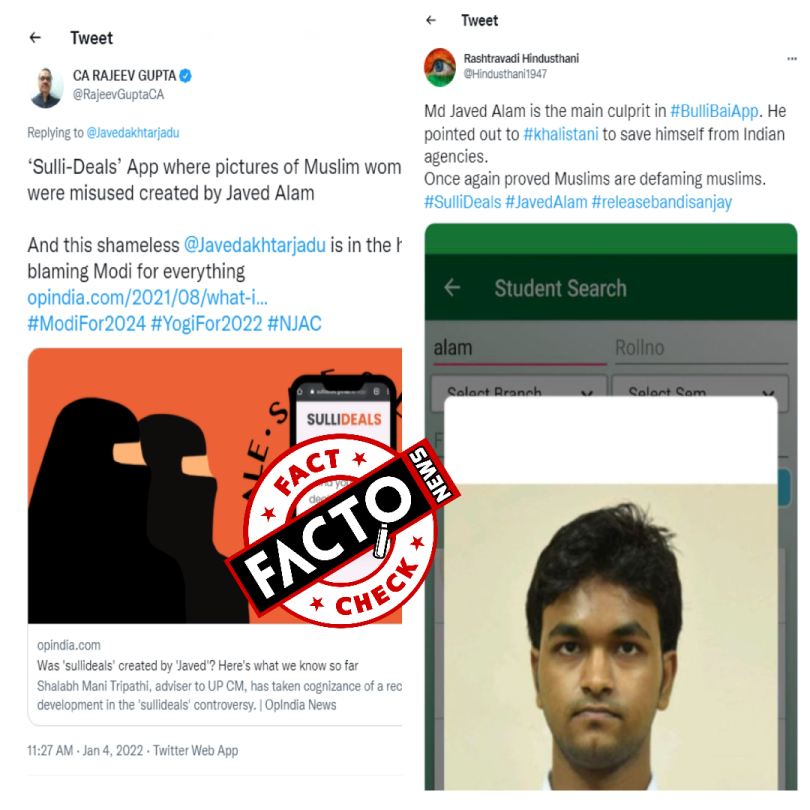 On January 1, 2022, the Bulli Bai app was launched on GitHub, a provider of Internet hosting for software development, where the doctored photos of several known Muslim journalists and activists were uploaded in a fake online auction without their permission with malicious intent. Similar to the Sulli Deals app which was brought to the public eye in July last year after the pictures of Muslim women posted on Twitter were described as the ‘deal of the day’. Following the outrage GitHub took down both the apps from the web platform, however, since then this case was taking multiple twists and turns and different angles related to the case came to light. One of which is a claim that is doing rounds on social media alleging Javed Alam, a 23-year-old university student from UP to be the creator and main conspirator behind the Sulli Deal app.

A verified Twitter account @RajeevGuptaCA  posted a tweet in reply to the tweet of Javed Akhtar, with the caption, Sulli-Deals’ App where pictures of Muslim women were misused created by Javed Alam, and this shameless @Javedakhtarjadu is in the habit of blaming Modi for everything. Archive|Tweet 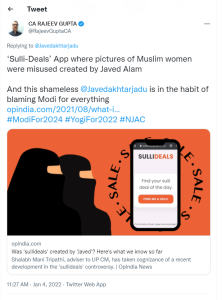 Another user goes by the Twitter handle name @Billiam_Shake posted the photo of Javed Alam in his tweet and wrote in the caption; This is Javed Alam, the creator of Sulli deals app that auctioned muslim women through stolen pictures. He was arrested and confessed his crimes. These apps and social media drama is created by Islamists for their Radical Islamic propaganda against Hindus to play victim card. Archive|Tweet

Last year on August 31st, 2021 Op India published an article regarding the man behind the infamous Sulli Deals app in which it reported the Twitter account @sullidealsXpose that first revealed the identity of Javed Alam and allegedly claimed him the real culprit, and ran a Twitter hashtag #ArrestJavedAlam. It further reported the Twitter thread of @sullidealsXpose which posted the Telegram chat conversation of Javed’s with @not_sameen, now suspended, wherein he purportedly confessed to being the creator of the app.
The Archive of the Twitter thread can be viewed here. 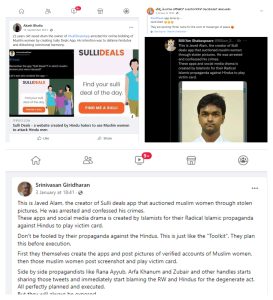 FactoCheck – Using the relevant keyword search, we found a news article on Dopolitics.in which reported on the matter and personally contacted Javed to find whether he is the real creator of the Sulli Deal app. As per the report, Javed admitted to creating two different fake Twitter accounts by the name of Zubair and Rajiv but denied his association with the Sulli Deal app. He further said, ‘he indeed chatted with @not_sameen but nowhere did he mention anything about Sulli Deal and he neither spoke anything against a particular religion nor said anything to hurt someone’s religious belief.’ 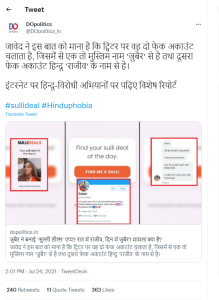 On 5th January 2022, Delhi Police arrested the main accused of the Bulli Bai case, Niraj Bishnoi, a 20-year-old engineering student from his house in Jorhat, Assam. During Bishnoi’s interrogation, he revealed his involvement in the Sulli Deal case and provided the information to police about the creator of the Sulli Deal app. Later based on Bishnoi’s information Delhi Police on 9th January arrested Aumkareshwar Thakur, a 26-year-old who holds a BCA degree from IPS Academy, from Indore. DCP (IFSO) KPS Malhotra told The Quint, during Thakur’s interrogation he confessed to creating the Sulli Deal app.

We also found that Bishnoi who is the real conspirator behind the Bulli Bai app was the one who tried to promote the false narrative that, Javed Alam, has created the Sulli Deal app using the hashtag #ArrestJavedAlam on Twitter Profile @giyu007, reported The Print.

To find the origin of the viral photo of Javed and whether he studied at GLA University, Mathura, our team headed their official website. And, in the placement records list of the university, we found his same viral photo.

Conclusion – The claim that Javed was the main person and creator of the Sulli Deal app is completely false. And, the real accused has been arrested by Delhi Police.

We Verify for YOU!
Got a second Thought about a post or information you came across online/WhatsApp and want it verified? Send it to us on WhatsApp at 9632808080, or e-mail it to us at fc@factonews.co and we'll fact-check it for you.

Donate to FactO!
If you love what we do @ FactO, you can pour some love and made us feel stronger. We are independently committed to your excellence with full accountability and transparency. You can click on the button below and make a payment of your own choice.

Hritik Mishra is working as a fact-checker with Facto News who possesses the knowledge of preparing effective write-ups. A laxative thinker with a flair for identifying and adopting trends and seeks to transcend his limits. He has the experience of working with Newslaundry for their editorial and research team. A strategic fact-checker with a positive mindset who loves to read books and editorials.