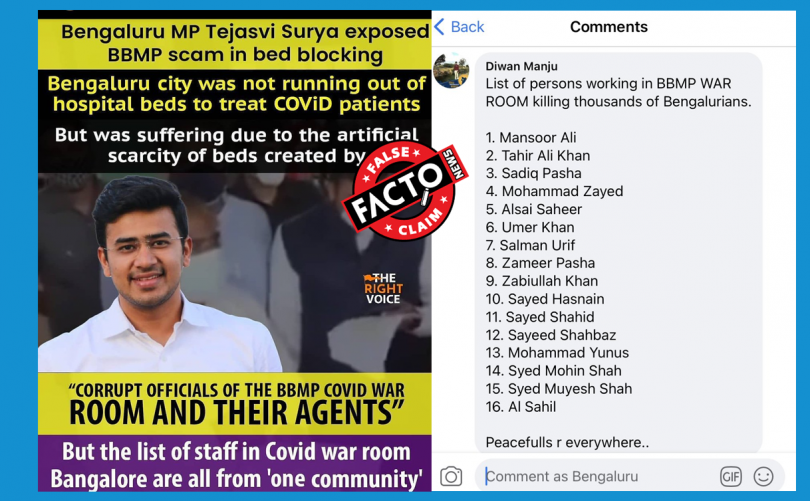 Bengaluru : Bengaluru South MP Tejasvi Surya and MLAs Ravi Subramanya, Satish Reddy, and Uday Gurudachar on 4th May, in an attempt to expose an alleged corruption and malpractice in allocating beds through the BBMP’s centralized bed allocation system held a press conference. Immediately after the press conference, a video started doing rounds across social media and WhatsApp in which Tejasvi Surya rattles off names of 17 Muslims from a list of 205+ to a BBMP South Zone official, working in BBMP WAR room asking on what basis were they hired and called it a “List of terrorists working in BBMP WAR ROOM killing thousands of Bengalurians”, they are ensuring no Hindus get beds easily.”

Following the viral video, many right wing propagandists have started adding communal angle to the issue. A Twitter post (now deleted) by “The Right Voice” claimed that the list of staff in Covid war room Bengaluru is all from one community. There is also a WhatsApp forward going viral with Muslim names including Sarfaraz Khan, Joint Commissioner Solid Waste Management, who later clarified in a Facebook post that he has nothing to do with the management of covid war room. 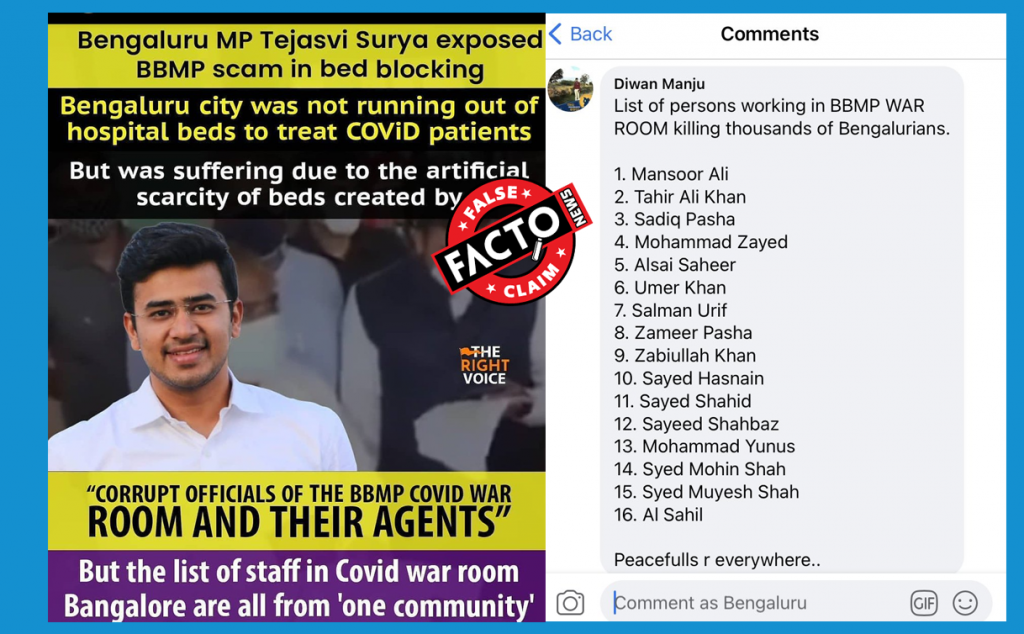 According to a news report by ‘The News Minute‘  the complete list of BBMP Employees working in BBMP south zone WAR room for COVID consists of 205+ employees working in different shits which included 17 Muslims. Several Twitter users have also shared the list and questioned Tejasvi Surya’s intentions. Activist Kavitha Reddy shared a list from her official handle and said “Once again @Tejasvi_Surya proved that you are nothing more than a Gutter Snipe, out of 206 BBMP Call Center employee you only read 16 Muslim names, the intent was to make it Communal just like always….. Shameless B……! #BBMPBedScam #COVIDEmergency2021“

Once again @Tejasvi_Surya proved that you are nothing more than a Gutter Snipe, out of 206 BBMP Call Center employee you only read 16 Muslim names, the intent was to make it Communal just like always….. Shameless B……! #BBMPBedScam #COVIDEmergency2021 pic.twitter.com/Mv8iDI2kpe

Another Politician from Bengaluru Mr. GC Chandrashekhar, a Rajya Sabha member has also shared the complete list from his official Facebook handle.

Conclusion: On May 5, the Bengaluru police have arrested four accused– Rihan, Shashi, Rohit and Netravati and also questioned four others including a man named Suresh who the police wanted to arrest but was in isolation as he is Covid positive. MP Tejasvi Surya picking out 17 Muslim names from a list of 205+ and alleging them to corruption without proofs is clearly an act of false and misleading narrative to divert people’s attention by planting communal hatred into their heads. Also, the claim that all BBMP South War room employees are from one community is found to be false and misleading.