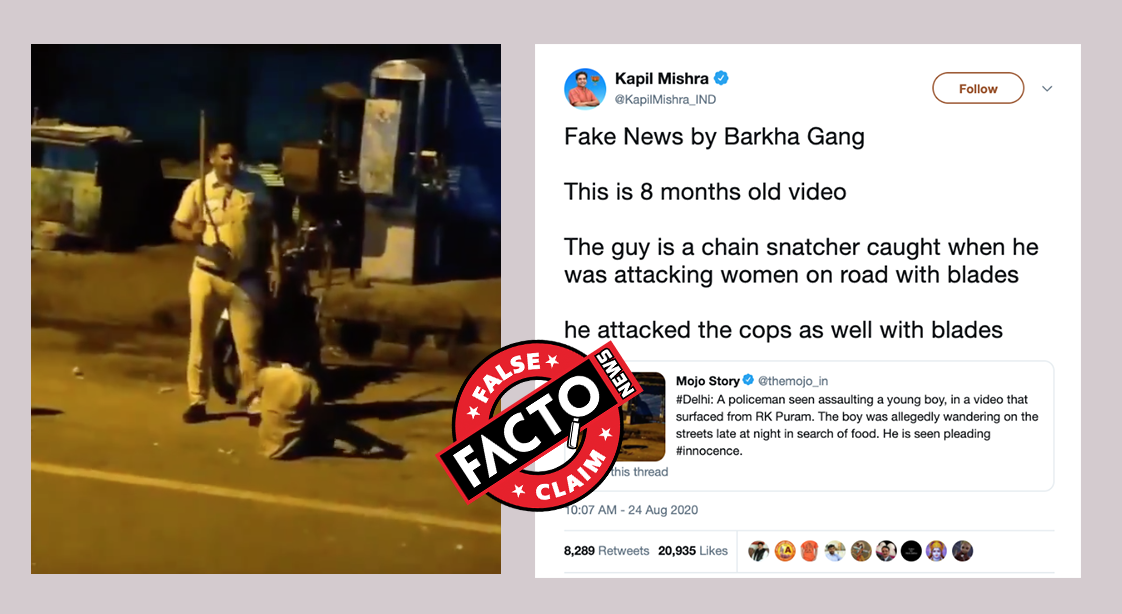 Delhi:  The Mojo Story has posted a video on 24th AUG in which a Policeman can be seen beating a child with Lathi. The Mojo Story is a Video blog platform run by Barkha Dutt. As soon as the story went viral on Twitter, BJP Delhi leader Kapil Mishra quoted the tweet and claimed that the video is 8 months old.

#Delhi: A policeman seen assaulting a young boy, in a video that surfaced from RK Puram. The boy was allegedly wandering on the streets late at night in search of food. He is seen pleading #innocence. pic.twitter.com/RqCEPE8tpP

Mishra has over 800K followers and his tweet went viral, he also created a false claim that man was a chain snatcher and attacked the Police with a blade.

“Fake News by Barkha Gang, This is 8 months old video, The guy is a chain snatcher caught when he was attacking women on road with blades he attacked the cops as well with blades”
This claim went so viral, can be found here. 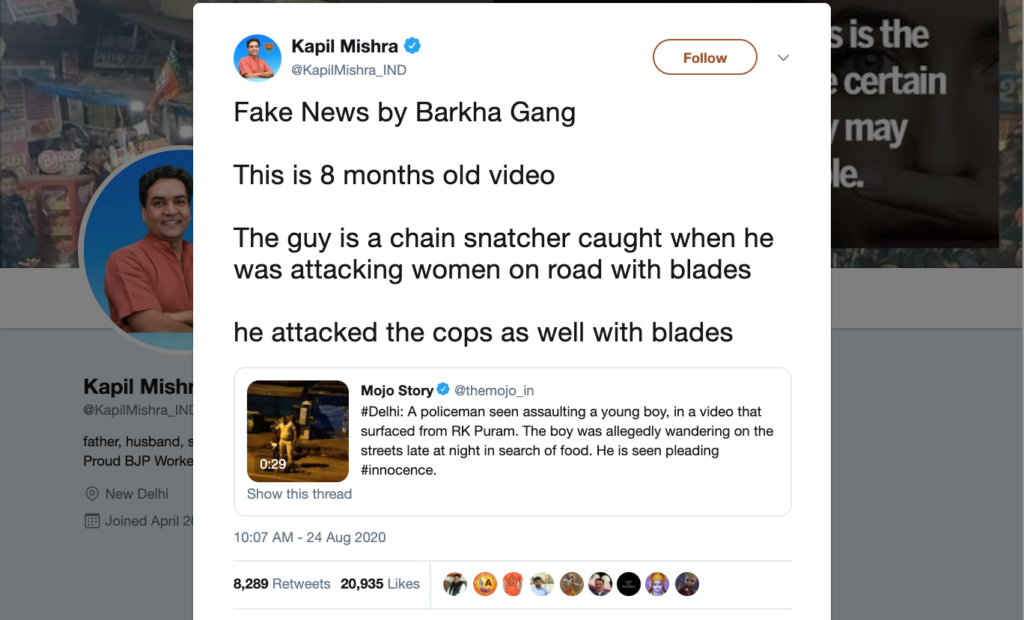 A Delhi Based Journalist Raj Shekhar Jha also made the same claim about the video. Jha’s tweet from his official/verified handle went viral on social media. He claimed that Delhi Police has clarified that Video is 8-month old, and the guy was a chain snatcher.

“The video of a policeman beating up a man in Delhi is eight months old. The guy in question is a snatcher who was caught while using blades to attack people during the crime. Before the video was shot, he had attacked the cops as well, Delhi Police has clarified” (Archive)

His tweet went viral along with Mishra’s. People started sharing a screenshot of Raj Shekhar’s tweet with Mojo story’s to target Barkha Dutt and Mojo Story. Rishi Bagree, a relentless purveyor of misinformation has also shared Raj Sekhar’s tweet along with Mojo Story’s. The same post he made over his Facebook page also got over a thousand shares. 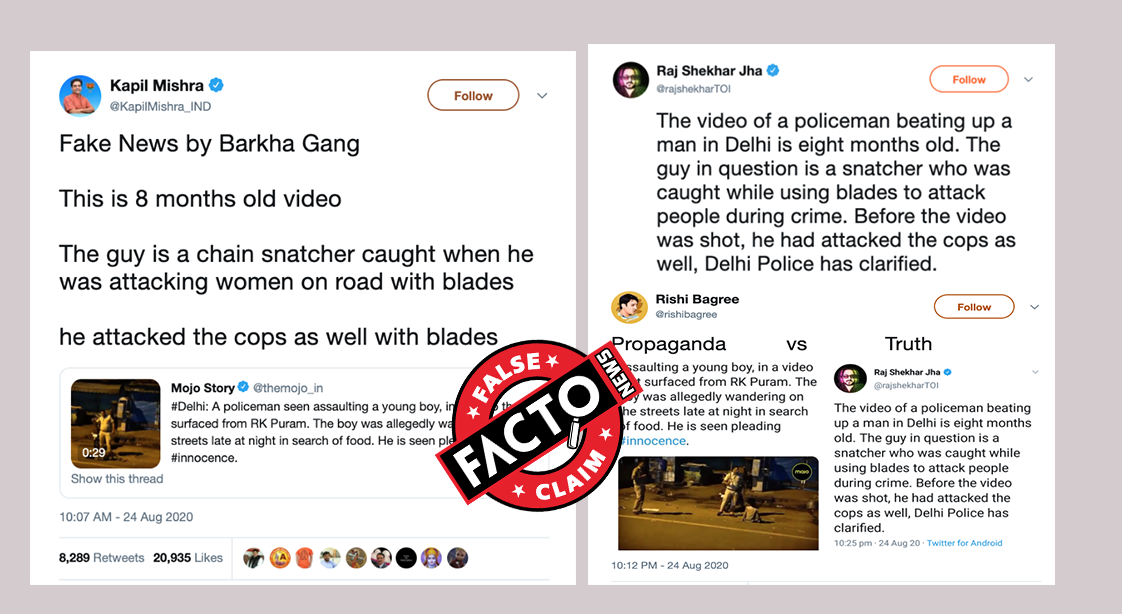 We will investigate all three claims of Kapil Mishra here., (1) Video is 8 months old, (2) Man is chain snatcher, and (3) He attacked Police. Since the video went viral everyone was waiting for the Truth, even the Mojo had no evidence to prove if the video is latest or old, They made a tweet saying they are trying to get details from stranger who sent them the video.

Many of you have asked us for more details on this story. This video was sent by our local stringer. We have asked him to get back to us with details and will update our viewers as soon as we can.

This morning, Indian Express has published an article “Inquiry ordered against Delhi cop after a video of him beating child goes viral”,  According to the article, The police believe the incident took place on August 22, when the constable was on night duty and found some children lying on the road in the area. “He asked them to leave, but when he came back 30 minutes later, he found them lying in the same location. He then started beating a boy with a lathi (stick). A passerby recorded the incident,” a senior police officer said. 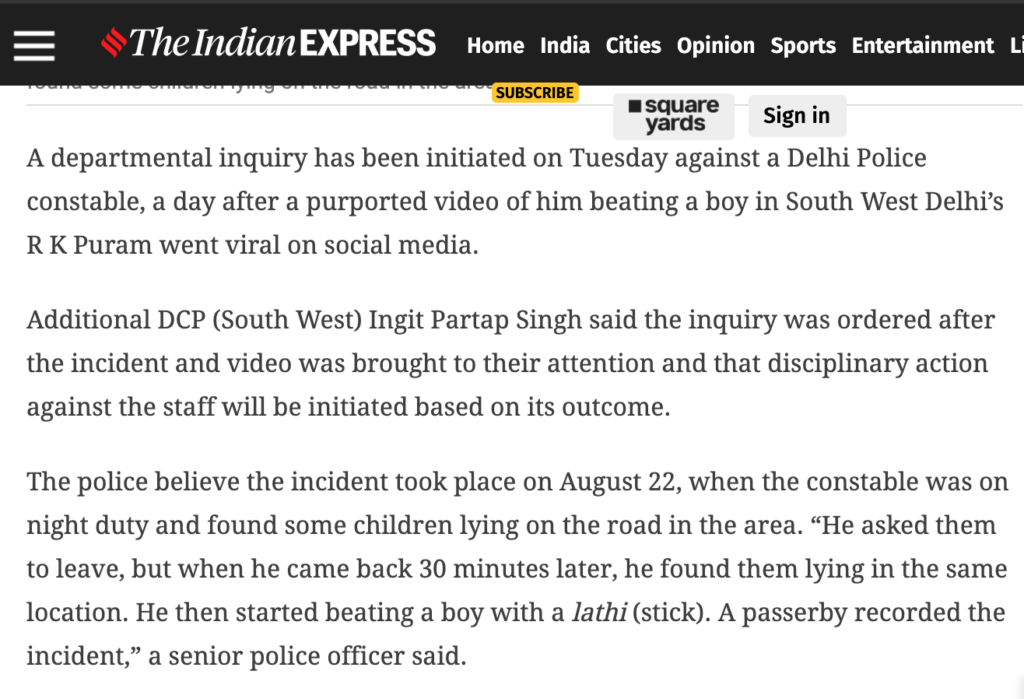 So this clarifies that all the 3 claims made by Mr. Kapil Mishra are found to be Fake.

We Verify for YOU!
Got a second Thought about a post or information you came across online/WhatsApp and want it verified? Send it to us on WhatsApp at 9632808080, or e-mail it to us at fc@factonews.co and we'll fact-check it for you.

Donate to FactO!
If you love what we do @ FactO, you can pour some love and made us feel stronger. We are independently committed to your excellence with full accountability and transparency. You can click on the button below and make a payment of your own choice.