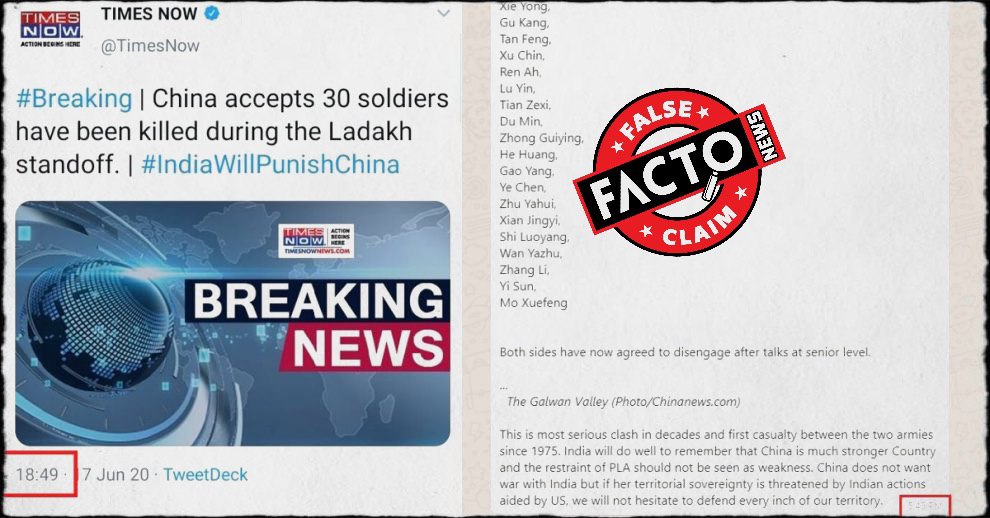 A military stand-off between Indian and Chinese troops along the Line of Actual Control (LAC) escalated on the night of June 15 leading to the death of at least 20 soldiers of the Indian army. While both sides have blamed the other for provocation, speculations on the number of Chinese casualties are on a rise. Journalists and media organisations had first claimed that five soldiers of the People’s Liberation Army (PLA) were killed and 11 were injured. The figure turned out to be unverified. It was subsequently claimed that 43 Chinese troops lost their lives. This too was misleading information.

Another figure was shared by Times Now as ‘breaking news’ on June 17 — “China accepts 30 soldiers have been killed during the Ladakh standoff” —  citing China-based Global Times as the source. The tweets were later taken down.

Times Now also aired a broadcast on the claim where anchors Rahul Shivshankar and Navika Kumar read out 30 names of Chinese soldiers who allegedly died. This can be watched from 4:30 minutes. However, in the end, Kumar said “Even this list put out by Global Times could be a fake forward.”

The claim that 30 Chinese troops were killed was also tweeted by Prashant Patel Umrao who has often been found promoting misinformation on social media.

A widely circulating claim across Facebook and Twitter suggested, “A spokesperson for the Western Theatre Command that oversees defences of #China’s border with India has released the names of 30 Chinese troops killed by Indian action.” These were the same names read out by Times Now anchors.

Below is the complete message shared by several on Twitter.

The message, which also sites Global Times as the source, shares a link to the website chinanews.com. Times Now’s broadcast was aired at around 6:40 PM while the channel tweeted the claim at 6:49 PM. Alt News received a query for the message at 5:43 PM on WhatsApp.

The link to chinanews.com leads to the website’s homepage and not a report. In the past as well, Alt News has debunked elaborate forwarded messages that carry a link to the homepage of news websites to give the message an illusion of credibility.

A search on the Twitter page and website of Global Times reveals that the organisation has not published any number on Chinese casualties. The last two tweets (1, 2) about the military dispute on Global Times talk about the telephonic conversation between Indian foreign minister and his Chinese counterpart. In fact, the names of the “30 dead Chinese soldiers” was also not found on the website.

As of this writing, Beijing has not released the number of casualties, dead or injured. This was tweeted by the editor-in-chief of Global Times Hu Xijin on June 16.

Chinese side didn’t release number of PLA casualties in clash with Indian soldiers. My understanding is the Chinese side doesn’t want people of the two countries to compare the casualties number so to avoid stoking public mood. This is goodwill from Beijing.

The only numbers floating right now are “43 casualties” reported by ANI based on “sources” and “35 casualties” quoted by “US intelligence sources” according to a website called usnews.com. However, neither has any prominent defence reporter confirmed these figures nor have the governments of both countries released an official number on Chinese casualties.

This Article was First Published by AltNews

Alternative News and Views in the Post-Truth World