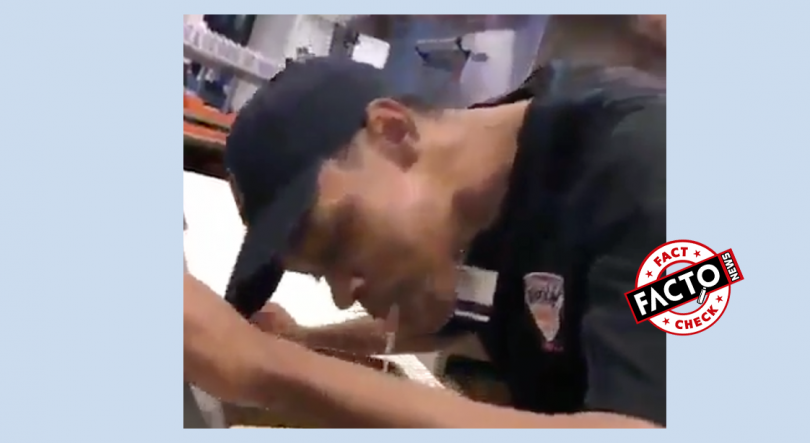 A video of a man spitting on a pizza while preparing it is viral across social media with a claim that he is an Algerian refugee working in London. The man in the video is seen spitting on the pizza dough and covering it with sauce. The clip has been shared by several netizens with a claim, ” यह लंदन का दृश्य है और यह शांतिदूत अल्जीरिया से आया हुआ एक शरणार्थी है सीधी सी बात है जैसे ही पता चले कि इनकी दुकान है चुपचाप कट लो वरना इनका थूक वाला खाओ (From a restaurant in London. This peace-messenger is a refugee from Algeria. Simply leave the restaurant if you know it’s their or eat the contaminated food)

Reverse image search of key frames and keyword search has directed us to multiple articles that covered the incident. According to an article, “Police charge Detroit Tigers stadium employee who spit on pizza in Instagram video” published by CBS Sports on Sep 25, 2018, police have detained and charged a 20-year old food vendor Jaylon Kerley working at a stadium for spitting onto pizza dough and covering the saliva with sauce. The video went viral in Instagram after his coworker ‘Quinelle May’ uploaded it. On being asked why Jaylon has to spit on the Pizza, May said the man was just “mad and having a bad day.” Jaylon is charged with both a felony and misdemeanor count of food law violations.

Conclusion: The man seen spitting onto pizza dough is identified as Jaylon Kerley from Detroit, USA. He is not an Algerian refugee from London as the viral posts claimed. The above claims are misleading and fake.