Andhra Pradesh: A video of a man disguised in a Burka, caught by the police went viral with a claim that the person in the Burka is waving Pakistan’s national flag on the Independence day (India’s). 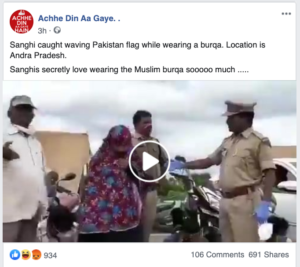 Many people have shared the video with the same claim, below by Raju Upman got over 4K RTs. (Archive)

More Such claims can be found here.

Ever since the  Andhra Pradesh state government has implemented a new excise policy from October 2019, the liquor sales in the state have decreased gradually. The new policy aims to implement a complete liquor ban in a phased manner. Andhra Pradesh Beverages Corporation Limited(APBCL) has taken over the functioning of wine shops across the state. The liquor sold through retail outlets had become costlier as the taxes increased and the number of outlets is reduced by 20%. Taking advantage of the situation, many miscreants have started smuggling liquor from neighboring states.

A reverse image search of some keyframes of the viral video had led us to a YouTube video from ETV’s official channel. According to the news report from ETV Andhra Pradesh, several men were arrested for smuggling liquor from Telangana to Andhra Pradesh. The Andhra Pradesh police have arrested these men at the Panchalingala check-post, Kurnool district. Disguised in a burqa, these men were smuggling 304 liquor bottles.

Conclusion: The claim that men disguised in burqa waving a Pakistan flag in Andhra Pradesh is fake and misleading. The police caught them while they were smuggling liquor from Telangana to Andhra Pradesh.

Fake Alert: Collage of 16 injured women is very old & not from Sweden riots.

Mumbai: Bollywood actress Deepika Padukone was summoned by the Narcotics control bureau(NCB), Mumbai for investigation of drugs consumption/practice in Bollywood which is allegedly linked to the Sushant Singh Rajput’s suicide case. Deepika was in Mumbai on 26th September for NCB investigation. At the same time, farmers in India were protesting against the NDA govt.’s farm bills which were passed in the Parliament the same week.

A Photo of Deepika Padukone went viral on social media, where Deepika can be seen wearing a Black t-shirt with “I Stand with Indian Farmers” written over the tee. A Facebook page by name ‘कन्हैया कुमार फैन'(Kanhaiya Kumar Fan) posted the same photo which got over 7.5K shares and 81k likes. Archive 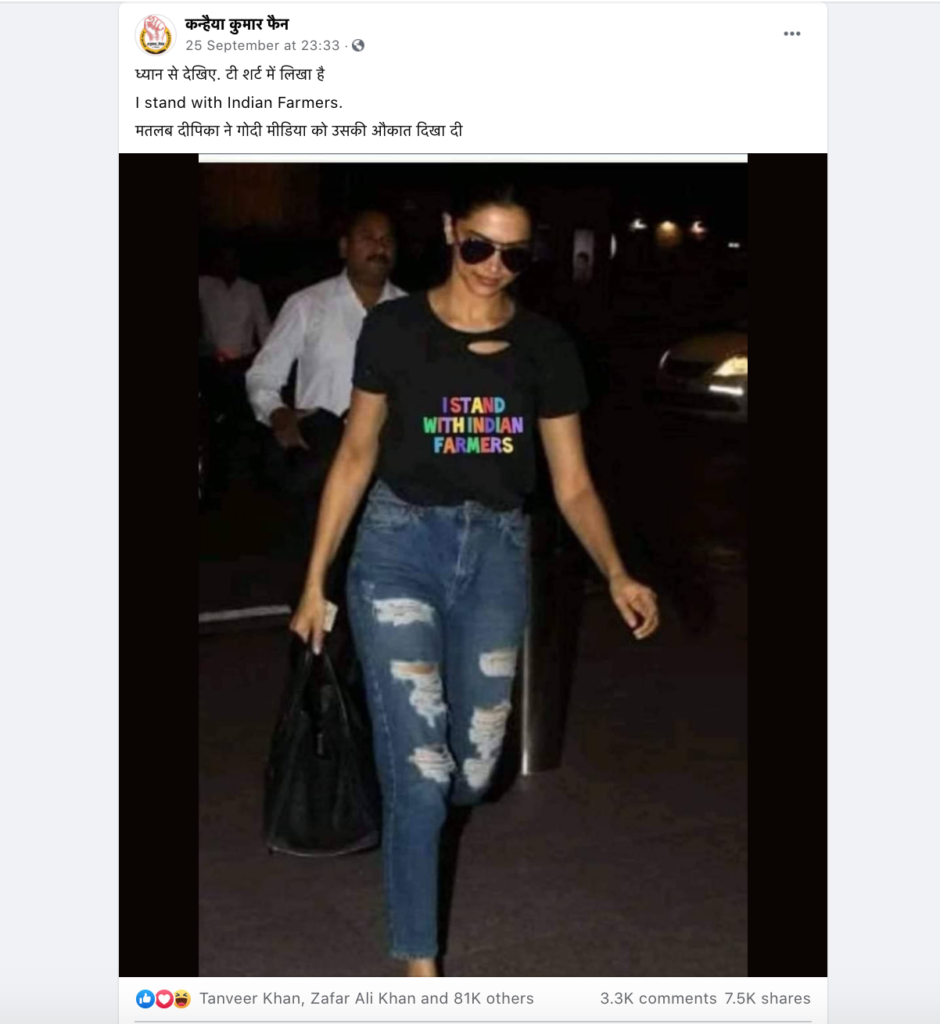 The photo has been shared over twitter by many users.

Many users have shared this edited photo of Deepika Padukone on twitter, find here. Last Month, Sushant Singh Rajput’s Ex-Girlfriend Reah Chakraborty was seen wearing a t-shirt with the quote “Roses are red, violets are blue, let’s smash the patriarchy, me and you” when she was visiting NCB office in Mumbai for interrogation, and later she was arrested after 9 hours of interrogation.

On 9th January,  Deepika Padukone was seen standing with JNU students in solidarity after JNU student leader and other students were beaten by allegedly ABVP members. Deepika was praised by many across India for her bold move and standing against the odds.

To find the truth about this viral photo, we did a simple reverse image search and found an Indian Express article published on 20th March 2018 with the heading “Celeb spotting: Priyanka Chopra, Chitrangda Singh, Deepika Padukone, and others”, the Deepika photo was captioned as “Deepika Padukone was seen coming out of the airport. (Source: Photo by Varinder Chawla)”. 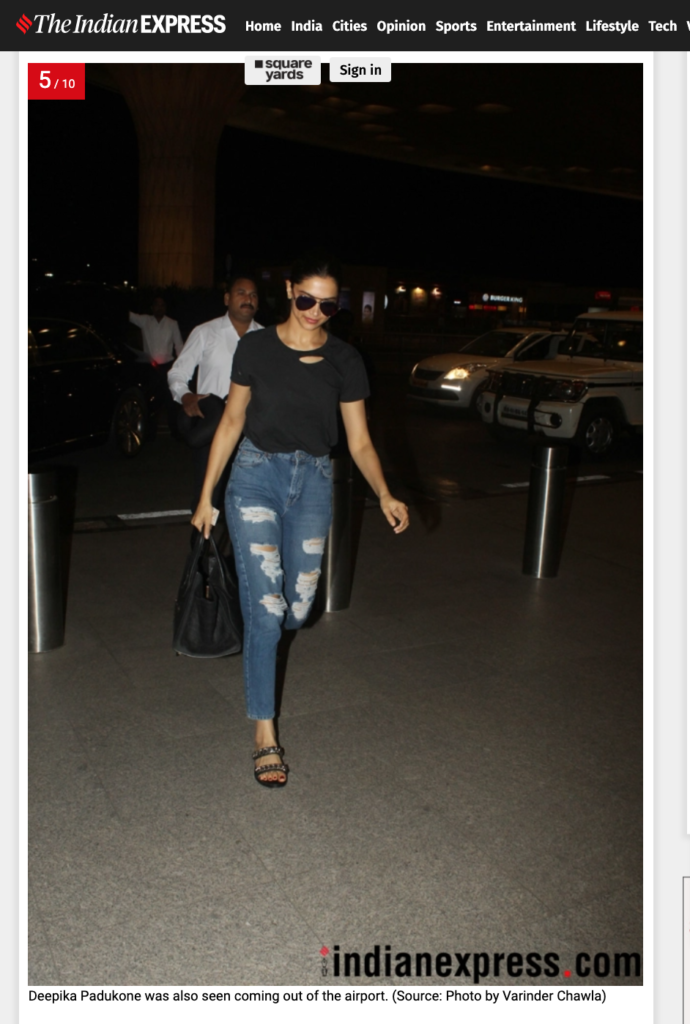 Conclusion: Photoshopped photo of Deepika Padukone has been shared during the Farmer’s protest. The original photo is 2 years old as per the source. The claims are misleading and false.

Amul Corp, which is known for its daily toon on current affairs, was accused of featuring Urmila in their latest cartoon. Many took on twitter asking Amul’s stand on the sexist cartoon on Urmila Matondkar.

A twitter user and INC member as per her Twitter bio, wrote “Amul has displayed the worst possible taste in releasing this ad. Playing up the ‘Urmilla Matondkar is a soft-porn actress’ accusation. Seriously, Amul?”,  (Archive) 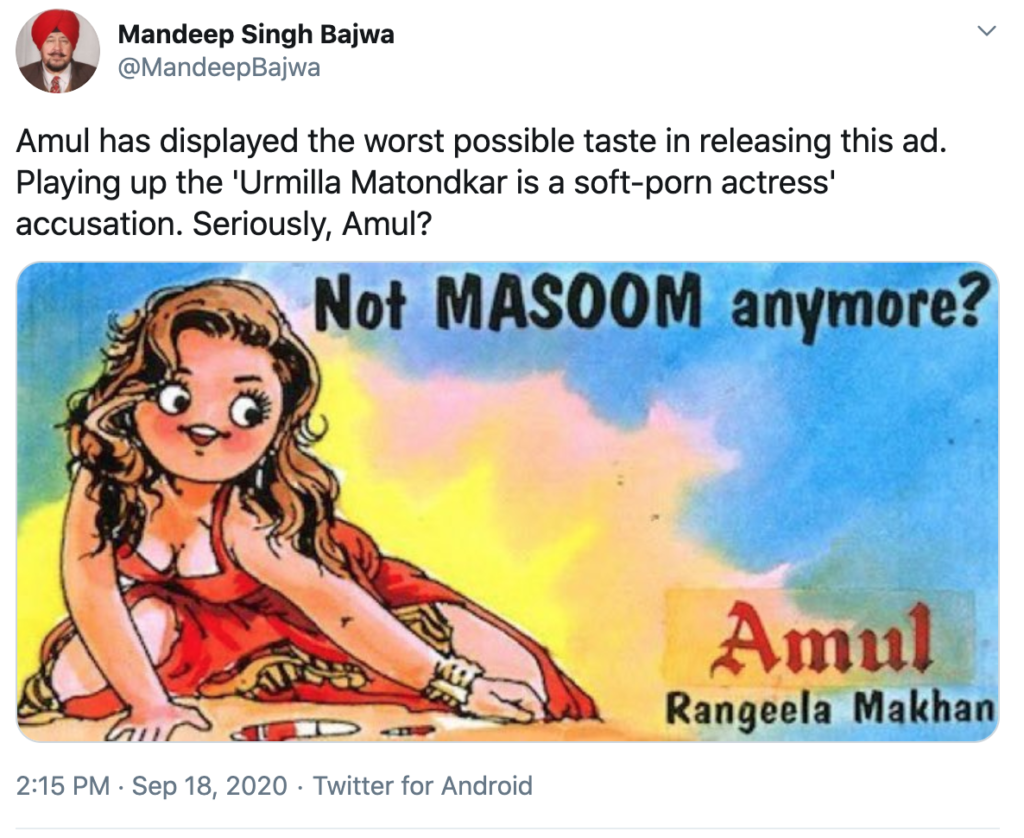 Another wtitter user, Shah Alam Kham, wrote. “Dear @Amul_Coop @amulcares When you objectify female body it’s poor ethics. When you take sides and then objectify a woman from the other side, it’s vile, obnoxious mind set. In this corporatised world, this is also poor consumerism. You lost one customer for life.” (Archive) 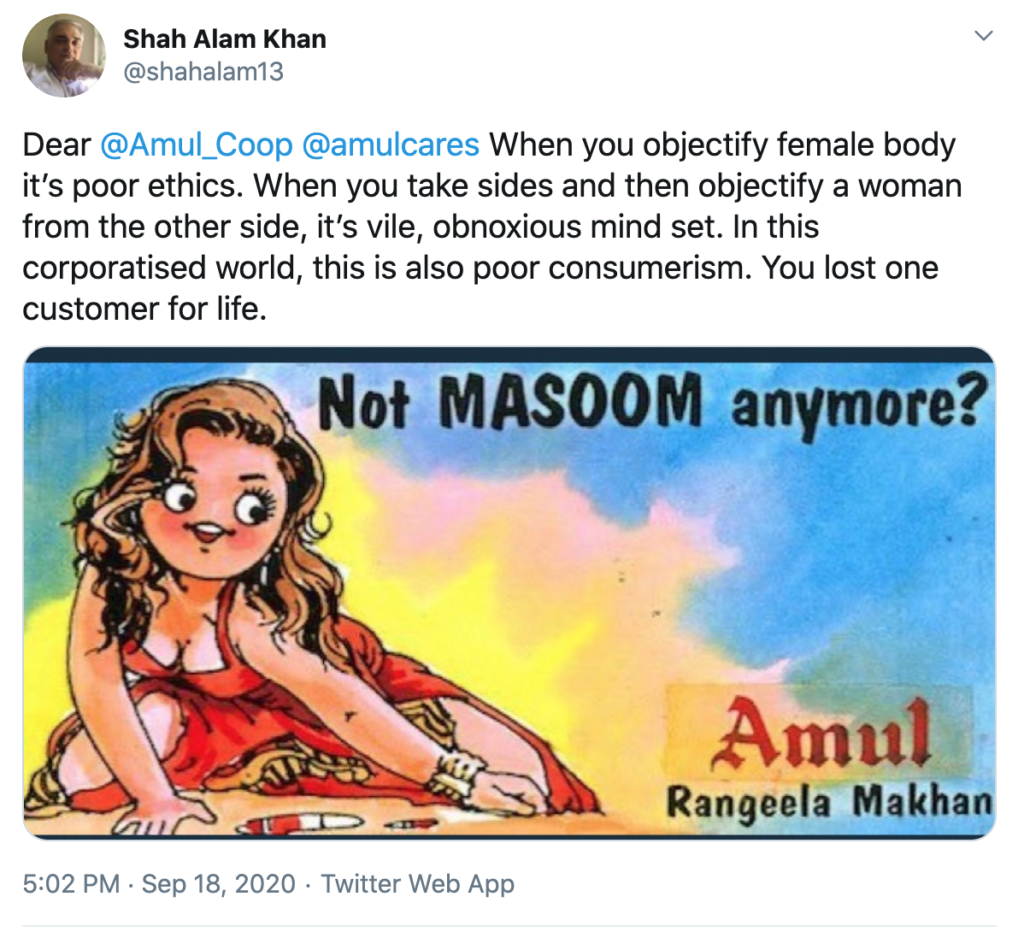 With a simple reverse image search, we found the cartoon on Amul’s official website, with the heading Amul hits 1995. The viral cartoon can be seen In the 2nd page. The viral Amul’s cartoon was made in 1995 during the Bollywood movie Rangela’s poster release, where Urmila was seen completely different from the 1992 movie Masoom. That’s the reason the tag line on Amul toon was “Not Masoom Anymore?”. 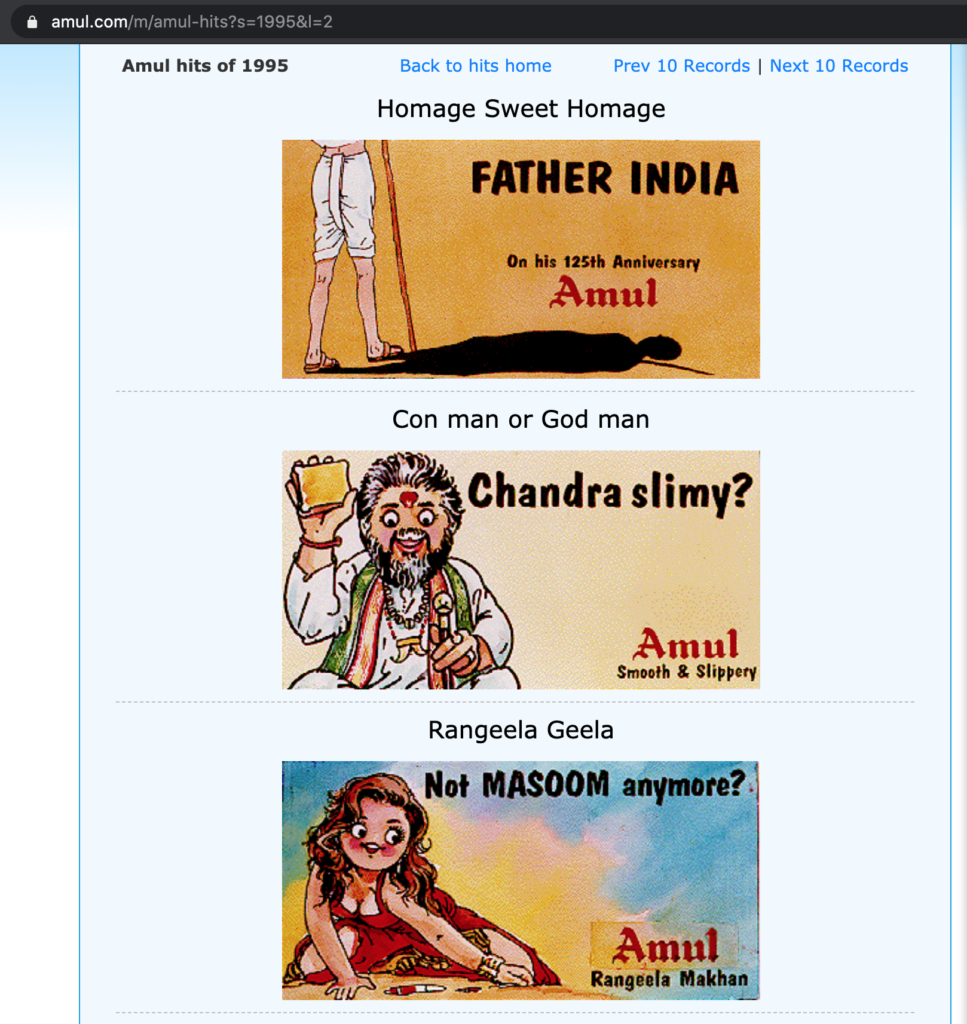 While replying to Swati Chaturvedi, Anurag Kashyap tweeted, “If I am not mistaken, this came out when “Rangeela” released and not now. And it was based on the fact that Urmila was the child actor in “Masoom”. It was meant to be an appreciation. Now misused by trolls after the current scenario.”

If I am Not mistaken , this came out when “Rangeela” released and not now. And it was based on the fact that Urmila was the child actor in “Masoom”. It was meant to be an appreciation . Now misused by trolls after the current scenario.

Conclusion: We have found the viral Amul cartoon was made during the Bollywood movie Rangeela’s poster release, it’s not the latest cartoon as claimed by social media users

Kangana Ranaut falls for satire, thanks Facebook for ‘mark yourself safe from Shiv Sena’ feature and later clarifies.

Mumbai: Kangana has been in the limelight since the day she joined Twitter officially. She was initially in the news demanding justice for Sushant Singh Rajput, but then eventually tables have turned, due to Kangana Ranaut’s remarks on comparing Mumbai to PoK (Pakistan Occupied Kashmir). The focus now has shifted to Maharashtra’s Shiv Sena govt. vs Kangana Ranaut. Yesterday, she quoted “The Fauxy” in a tweet (Archive) thanking Facebook for introducing “Mark Yourself Safe From Shivsena Goons”. The Fauxy published an article satirical portal after an attack on Retd Navy officer by Shiv Sena goons for sharing a cartoon (archive here)

Kangana’s tweet went so viral and received over 8K RTs. She Wrote “Thank you Facebook free speech must be protected in a democracy, people need to be protected from Sonia Sena goons much like COVID -19 virus, thank you for being considerate, well done (Clap Emoji)” 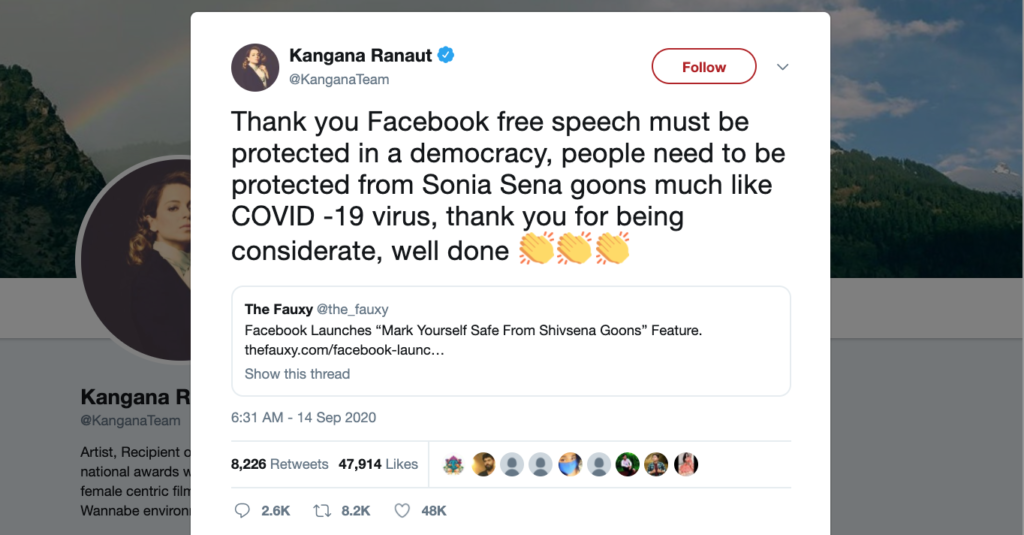 In her previous tweets, she misled many people by sharing a 10-year-old Aamir khan’s fake quote , again falsely claiming that Aamir Khan said he was scared of India.

When we checked their twitter handle and website, we found a disclaimer that says, “The Fauxy is a Satire Web Portal. The content of this website is a work of fiction. Readers are advised not to confuse the articles of The Fauxy as genuine and true.” We also found that many twitter users replied to the Kangana’s tweet and informed her the same. After multiple replies and clarifications by twitter users, the actress finally responded, but not to her tweet.

We found a tweet by Kangana responding to FJP India(Free Journal Press), where she has clarified that she was being sarcastic.

The news I have tagged it’s account clearly says it’s a fictitious news source. Intended for sarcasm and satire …

Conclusion: The social media users have a divided opinion on this. While many have trolled the actress, some believe that her tweet is intended for sarcasm. It would have been better, if Kangana has replied to her own tweet clarifying the issue.