India: An alleged derogatory Facebook post against Prophet Muhammad (Islam) has triggered violence in Bengaluru which left three dead and many injured. The Bengaluru police had arrested P. Naveen Kumar, accused of posting derogatory content in Facebook, the police also arrested at least 150 members of the Social Democratic Party of India (SDPI) for inciting and participating in riots.  As communal tensions are stirring up across Bengaluru, a picture of an objectionable painting of Lord Sri Krishna is going viral with a claim to punish the accused. Many social media users have shared the image comparing it to the incident that happened in Bengaluru and demanding the painter Akram Hussain to be arrested.

Deepak Chaurasia of News Nation has tweeted from his official handle said, “Akram Hussain, a painter from Assam, has exhibited an objectionable photograph of Lord Shri Krishna at the Ravindra Bhavan, the Guwahati Art Gallery. You all will remember the Bangalore incident .. Even then we are intolerant. !! Those who commit such slanderous acts are not forgiven”. (Archive)

Shefali Vaidya had questioned what Hindus should do about Akram’s objectionable painting referring to the Bengaluru incident. Archive

Bengaluru burned coz one Naveen allegedly posted a meme showing a ‘peaceful’ religious icon with an underage girl. No woke libt@rd said that was Naveen’s #FoE and he has a right to it. Akram Hussain fm Assam paints Shri Krishna with half-naked women, what should the Hindus do?

Arun Pudur, a self-claimed activist to end Hinduphobia, shared the image, questioning if Akram will be arrested for this. (Archive)

Akram Hussain, an Assam based Muslim ’Artist’ depicts Lord Krishna with Bikini Girls & this piece has been displayed in Gawhati Art Gallery.#BangaloreRiots for a FB comment. Praveen who expressed his FOE was arrested for hurting sentiments

Will Akram be arrested for this? pic.twitter.com/3GYl8S9thE

Sadhavi Khosla tweeted about this with caption, “One objectionable post on Prophet (which was in response to objectionable comments on Lord Ram)-they burnt a part of Bangalore. And here a Muslim painter paints Lord Krishna in a highly objectionable manner. Will this be counted as blasphemy?Or that’s only for One sect?”  (Archive)

One objectionable post on Prophet (which was in response to objectionable comments on Lord Ram)-they burnt a part of Bangalore. And here a Muslim painter paints Lord Krishna in a highly objectionable manner. Will this be counted as blasphemy?Or that’s only for One sect? @HMOIndia https://t.co/wojFCZCwvm

Hundreds od another such claim can be found under #AkramHussian

According to an article from ZEE News, the painting now going viral is from 2015. Assam based painter Akram Hussain had displayed two painting at an exhibition at Assam state art gallery on April 8, 2015. In one of the two paintings, Lord Sri Krishna was shown with semi-nude modern girls with liquor bottles in the background. A simple reverse image search had directed us to a couple of articles and tweets of Dainik Bhaskar from 2015.

The Guwahati police had registered a case against Akram Hussain and arrested him. The controversial painting was seized, today after that paining went viral Guhati Police has made a clarification tweet, “Pls refer to info shared by concerned citizens regarding an objectionable painting of Lord Shri Krishna. This incident is of 2015. Accordingly, Latasil PS Case No. 127/15 was registered, accused Akram Hussain arrested on 30/5/2015 & painting seized. It is not on display now.”

Pls refer to info shared by concerned citizens regarding an objectionable painting of Lord Shri Krishna. This incident is of 2015. Accordingly, Latasil PS Case No. 127/15 was registered, accused Akram Hussain arrested on 30/5/2015 & painting seized. It is not on display now.

Conclusion: It is evident that the painting is from 2015 and the accused Akram Hussain was already booked and arrested. The painting is now seized and not displayed anymore. Deepak Chaurasia, Shefali Vaidya and others are sharing old news and linking it to the Bengaluru incident only to mislead people and spread communal propaganda. We request social media users to verify the news before sharing.

Did Arjun Kapoor slap RJ over an inappropriate question? No, that was a prank.

Here is the viral video:

#SunilGavaskar was talking about a viral video of #AnushkaSharma and Virat Playing cricket on terrace garden during Lockdown. [16th May 2020] pic.twitter.com/nQ8eaiTadB

After the clip of Gavaskar’s comment gone viral, many of twitter users started questioning Gavaskar’s comment. Navika Kumar of Times Now wrote “For Tweeple to troll @AnushkaSharma for @imVkohli performance is disgusting. And the less said about Sunil Gavaskar the better. In fact BCCI should remove him from the commentators’ panel for the MCP attitude. #BoycottGavaskar” Archive

Bollywood actress Kangana Ranaut, who’s tweeting about everything nowadays has also supported Anushka Sharma, and wrote “#Anushka remained quiet when I was threatened and called Haramkhor but today the same misogyny coming to bite her, I condemn the fact that she was dragged into cricket by #SunilGavaskar but selective feminism is equally uncool.”

#Anushka remained quiet when I was threatened and called Haramkhor but today the same misogyny coming to bite her, I condemn the fact that she was dragged in to cricket by #SunilGavaskar but selective feminism is equally uncool.

Anushka Sharma also shared her disappointment being dragged into her husband’s poor performance on the ground., She also said Mr  Gavaskar’s name stands tall in the gentleman’s game. But she got disappointed with his commentary of dragging her into the game. 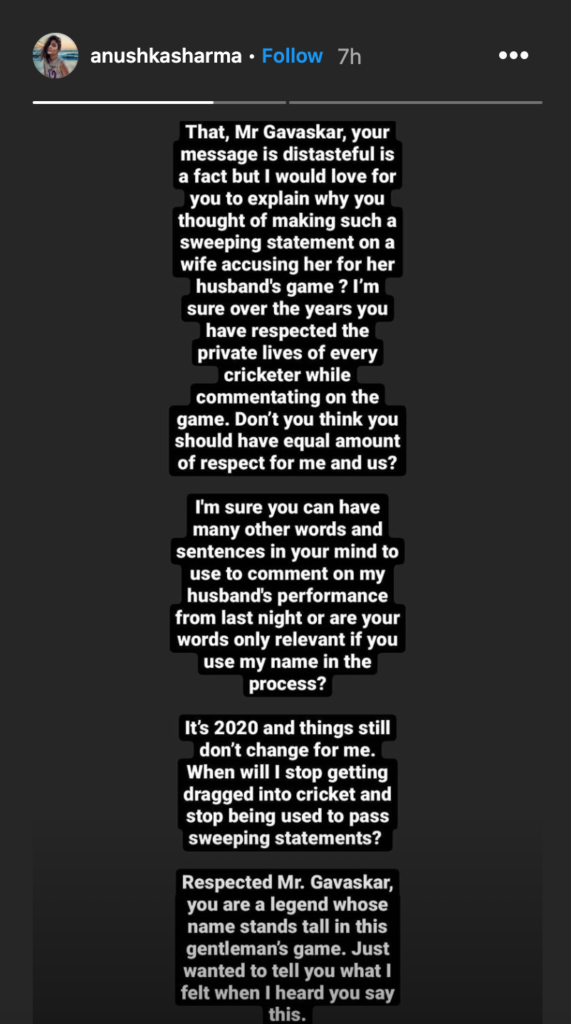 While talking to India Today he clarified, that he wasn’t being sexist but he was talking the fact that most of the players have no practice during the lockdown. Because of the lack of practice, lots of players are suffering. He also raised the question that he was just referring to the video which went viral on the internet, where Anushka was seen bowling to Virat on a terrace. He said, what is wrong in my comment, I just talked about what I have seen in the viral video. If someone  misinterpreted my words, that’s not my problem.

Where have I been sexist during my commentary? #SunilGavaskar breaks his silence over the controversy involving #AnushkaSharma and #ViratKohli.
Watch this #exclusive conversation with @BoriaMajumdar pic.twitter.com/9OzTbUih0B

Here is the video, which went viral where Virat Kohli and Anushka Sharma were seen playing cricket within their apartment compound. According to few sources, a twitter user has recorded the video and posted it. The video was allegedly shot on 16th May 2020. So, it is evident that Sunil Gavaskar was referring to this practice session.

We also found the Times of India Video, 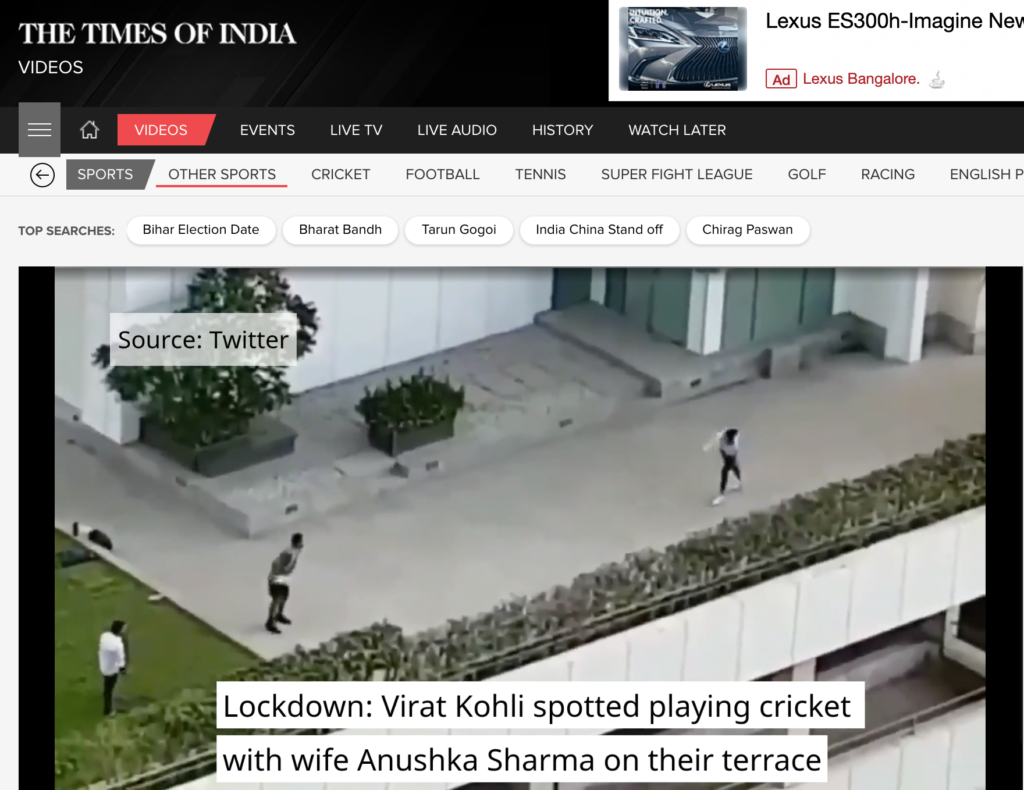 Conclusion: According to our findings, Sunil Gavaskar was just referring to the viral video, and wasn’t being sexist. His comment has been taken in the wrong sense. But he could have avoided bringing Anushka into his commentary.

Mumbai: The Narcotics Control Bureau (NCB) has arrested late actor Sushant Singh Rajput’s girlfriend Rhea Chakraborty and her brother Showik Chakraborty for their alleged role in procuring drugs for him. During the on-going investigation, Navika Kumar of  Times Now, on her “The Newshour” show mentioned that the NCB has a list of 25 A-Listers who are allegedly involved in drug consumption. Further, she claimed that top NCB sources have shared details of Rhea’s confession and she has named Sara Ali Khan, Rakul Preet Singh and Designer Simone Khambatta in her statement.

Times Now has reported that Rhea Chakraborty confessed that Rakul Preet and Sara Ali Khan have consumed drugs with her and Sushant Singh Rajput in his Lonavala farmhouse. Ever since the show aired, fake news has taken social media by storm. There are various posts that Sara Ali Khan and Rakul Preet are summoned by the NCB. On September 12, a tweet from a parody account of  Satish Maneshinde, Rhea’s lawyer went viral. The tweet (now deleted) claimed that Sara Ali Khan, Rakul Preet Singh and Simone Khambatta are summoned soon by the NCB.

This is not the first time Times Now caught spreading lies. Times Now has also tweeted a screenshot of the tweet made by a fake account pretending to be Sushant Singh Rajput’s sister Meetu Singh. 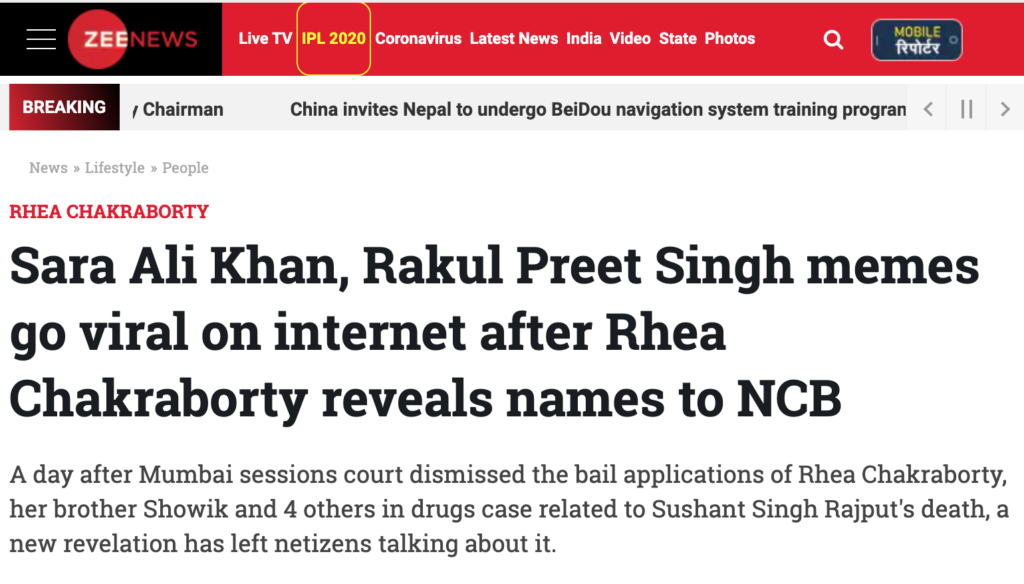 According to Free Press Journal, the Narcotics Control Bureau (NCB) has denied preparing any such list of Bollywood celebrities for their alleged drug consumption. NCB deputy director KPS Malhotra has told Free Press Journal that, “We have not prepared any Bollywood list. The list earlier prepared was of peddlers and traffickers. It’s getting confused with Bollywood.” When asked about Rhea’s confessing names f Sara Ali Khan, Rakul Preet Singh and Simone Khambatta in her statement, the officer said, “The names have not been zeroed upon”.

News 18 reports, ‘NCB has denied that Rhea Chakraborty during interrogation, gave names of 25 A-listers in the film industry who consumed drugs with her and the late actor’.

NCB has denied that Rhea Chakraborty during interrogation, gave names of 25 A-listers in the film industry who consumed drugs with her and the late actor.https://t.co/VZzrcNe8ro

Conclusion: The NCB has denied making preparing the list of so called 25 A-Listers based on Rhea’s statement. Times Now and Navika Kumar’s report on this issue is found to be false and misleading.

Surbhi, an IRS officer as per her twitter profile shared Mrs. Sudha Murthy’s photo with a fake claim which went viral, received over 3000RT.

Every year Sudha Murthy, wife of founder Infosys, spends one year selling vegetables to get rid of Ego.

How one doesn’t let money change their values. pic.twitter.com/9MbkpZcVoc

What an amazing gesture 👏👏👏 https://t.co/SUjFyIGRYC

Sakshi TV, a regional news channel from Andhra Pradesh and Telangana published the images on their YouTube channel claiming that Sudha Murthy is selling vegetables.

According to an article published by Bangalore Mirror in 2013, Sudha Murthy spends three days every year in seva programs. As per the article,  She wakes up at 4 am, reaches to the Raghavendra Swamy temple located in Jayanagar, Bengaluru, goes to the kitchen, and spends the next 4 hours cleaning the kitchen, washing utensils, chopping vegetables, and taking care of inventory of stock.

Sudha Murthy believes that “Giving money is easy because it is a simple transaction. But doing physical Seva is not”. She also says that “In the eyes of God we all are equal, but not in the eyes of the society”.

Conclusion: It is true that Sudha Murthy participates in seva programs. But the claim, “Sudha Murthy sells vegetables” made by Sakshi TV and other social media users is found to be false. According to the Mutt officials, Mrs. Murthy was maintaining the storage facility and sorting vegetables, but not selling them.